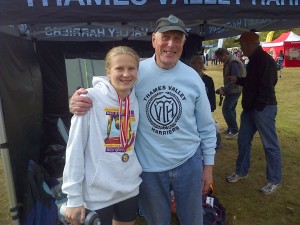 Sutton Park was at its best for the National Road Relay Championships on Sunday. Expectations were high for the Thames Valley young athletes with teams in all the girls races and under 15 and under 17 boys events. After running the fastest lap in the Southern Relay, Charlotte Buckley was hoping to improve on her 10th fastest under 13 lap last year. With 57 girls competing on the first lap of the 3.8km course it took Charlotte about 1k to get to the front. She then broke away from the opposition to win the first stage of the race by seven seconds. Her time of 14:06 won her the medal for the fastest lap. Naturally Freja Schaap was unable to hold this position but didn’t panic and did incredibly well to only drop back to 11th. Zakia Mossi came to the club’s rescue to make up the team at the last moment. She only had her 11th birthday in September and had never run more than 1500m in a race. After winning the Ealing Schools cross country race on Thursday she was keen to give it a go. She only dropped back to 24th out of the 49 finishing teams and we were all well pleased.

Next up were the under 15 girls relays. For the first time, the Valley had three complete teams taking part. For the ‘A’ team Kosana Weir had a very good start and came home in 12th position. She was then followed by Verity Walker who wasn’t feeling at her best and dropped to 18th even though she ran nine seconds faster than last year. On lap three India Weir had her best relay run so far to bring them home in 11th place. The best Valley position ever for this event. The ‘B’ team were led off by Alice Harray. She was running well for the first half of the lap until she developed breathing problems with her throat. She almost came to a standstill but struggle on to bring in the team in 51st place. She was over 50 seconds slower than last year but was very brave to get to the finish. Olivia Olsher then picked up 13 places even though she was 23 seconds slower than last year. Last for the team was Iona Pernthaller who was moving up an age group. She moved up seven more places to finish 30th. Then we even had a ‘C’ team! Led off by Matilda Ferrand who did well to finish 70th out of the 79 starters. Rose Barkle looked good as she picked up seven places and Sarah Goodhart also improved the team position to 58th.

Then things started to go wrong when Lucillo Burrell who should have been the under 15 boys lead-off failed to arrive in time. Finlay Watson was promoted to the ‘A’ team and Nicholas Duer was transferred from B2 to B1. Finlay tried his best but was outclassed on this lap and finished 62nd. Nicholas Duer was still changing his number when the gun went and was the last runner off on this lap. He ran bravely and nearly caught Finlay by the finish. Jake Hooley moved up to 53rd but was passed by Lucillo who after arriving late was given a run in the ‘B’ team and finished with the best TVH time of 13:32. Lap three had Louis Medd make up more placed for the ‘A’ team to finish 44th.

The under 17 women’s team had a real disaster when Maddy Turner was forced to stop at the furthest point away from home with breathing problems. She then had to be brought back to the first aid tent for treatment. I believe she has recovered and is now ok. Eve Goodhart found the opposition on the first lap very strong and was down in 29th place at the finish. Then Izzy Dye gave chase and moved up to 12th. She was disappointed to be slower than last year but then she had the advantage of mixing it on the first lap.

It was good to have a good team in the under 17 men’s relay. Karim Mahiddine was first off and did well on his first race of the season to finish in 12:56. This was 50 seconds faster than his time last year. Cassius Rathbone found himself in no man’s land between other runners but still picked up a place to finish 34th. Then Abraham Mendes Da Costa enjoyed the ‘glory leg’ by putting in a good finish to pass three runners and finish 31st. Alex Khlaf was our lone ‘B’ runner and he did well to finish in 13:52.