As reigning UKWAL Premier Division Champions, Thames Valley Harriers ladies team will be representing Great Britain at the European Champion Clubs Cup (ECCC) this Saturday 25th and Sunday 26th May, in Castelló, Spain. TVH will be competing in group A against Europe’s 8 best athletics teams from the Czechia, Denmark, Finland, Italy, Portugal, Spain and Turkey.

Congratulations to all the athletes (and their coaches) that have been selected. TVH’s fantastic team includes many of their athletes that won the ECCC Group B in Leiria, Portugal two years ago and they are looking forward to compete against strong opposition including some Olympians from the Group A teams. TVH’s team for the ECCC: 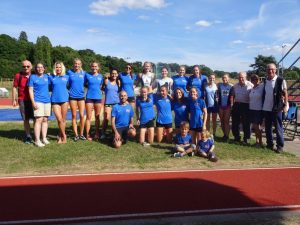 Last year in Birmingham the team finished a fantastic 4th place – the best finish by a GBR club since 1987, read more HERE
Good luck to all our girls competing!
For more information see the event website HERE