Thames Valley Harriers ladies won their first ever UKWAL Premier Division match in the opening fixture of the season despite terrible unseasonal weather conditions even for Edinburgh: cold, wet and exceptionally windy (gusts that were up to 50 miles/hour). However, the team is now well positioned to win the league and go on to represent Great Britain in the European Club Champions Cup next year.

TVH took their largest ever team to a UKWAL match with 29 athletes including six who made their debuts for TVH in the league (welcome to all the new team members!), all showing real team spirit, fighting for every point to be rewarded with this well-deserved result. In addition to the team win on the day, there were also seven individual event wins and remarkably no TVH athlete finished lower than 6th place against the top eight teams in the UK.

The first points of the day came in the long jump. Angela Barrett managed the windy conditions the best against some very good 6m+ jumpers to win the A string in a fine leap of 5.91m. Angela was well backed up by Ugne Liuksaityte making a welcome return to the team with a good 3rd place finish in the B sting with 5.44m. Angela was equally impressive in her specialist event the triple jump, winning the A string with 12.78m. With her first ever UKWAL Premier long and triple double victory, the TVH Field Athlete of the Match was awarded to Angela. Angela was well supported by Lia Stephenson, who due to a reoccurrence of a leg problem could only manage one jump but still claim 2nd place in the B string to earn TVH some more valuable points. The vertical jumps did not go to plan. During warm-up Anne Rees and Shannon Connolly looked like they would both be challenging for the club record and first place finishes in the pole vault but the wind took over and the event got cancelled due to health and safety reasons. The high jump saw a solid debut to club athletics from Annabelle Bates who cleared a good 1.55m in very tricky wind conditions. However, former GB heptathlete, Phyllis Agbo missed on points for the first time in nearly 10 years of competing for TVH by failing to clear her chosen opening height. 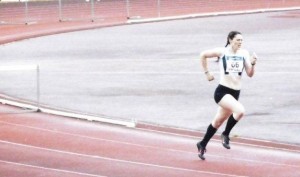 In the opening track event, Claire Taylor ran her first track race of the season and struggled a little with the wind but fought all the way to the line to finish 6th in the A string 400m hurdles with a time of 70.16. Lucy Ferguson set the tone for the day with TVH’s first victory of the day with a very gusty run in the 400m hurdles B string. Lucy started off cautiously on the back straight and coming into the home straight was in 3rd or 4th but ran all the way to line as the others slowed to take a narrow victory by less than two tenths of a second in a time of 67.17. Lucy ran an equally good race over the sprint hurdles to place 3rd in the B string in a season’s best time of 15.11. It was also nice to see Angelita Broadbelt-Blake not gettinga false start in the 100m hurdles – Angie is in great form this year and easily won her A string race in windy conditions with 13.59.

In the worse possible middle distance conditions, our ladies distance runners all did remarkably well in very exciting races. In the first middle distance event of the day, the 800m, Michaela Mayor ran a near perfect tactical race to finish strongly for 2nd in the B string in 2:15.0. The B string race saw Izzy Dye who has stepped up from TVH’s fine junior ranks to claim her place in the UKWAL for the first time. In other tactical race in the extreme winds; Izzy ran a well-judged race to finish in a great 2nd place for the team. The 1500m saw the return to the track to two athletes who have been out injured for a while, UKWAL debutant Emily Shearer and Katie Mellor. In a very competitive race and after a slow first lap from the leading group, both Emily and Katie were slightly off the pace but did extremely well to gain more valuable points by finishing 6th (4:47.0) and 5th (4:54.5) in their respective strings. With a few track sessions behind them both Emily and Katie will soon be challenging TVH middle distance club records. The 3000m was not so much a tactical race as the home Edinburgh athletes tried to race away from the start but with two laps to go TVH’s Fiona Thompson, who is another athlete just returning from a long term injury, judged her race much better to chase down the leading athletes, but just did not quite have enough left to sprint past the Swansea Harriers athlete in the last 50m to finish a narrow 2nd in the A string in 10:07.4. Lisa da Silva knew a quick time was out of the question, but knuckled down to finish a solid 2nd, also showing strength and experience by picking off athletes in the closing stages. The final middle distance event was the 2000m steeplechase which featured Maire Gorman (who had been helping our new timekeeper during the day) and debutant Lucy Smith. GB triathlete, Lucy, had already been getting much praise from her new teammates for the great sports massages that she was providing during the day and her first ever attempt at the steeplechase also did not disappoint. Lucy looked like a natural over the barriers to finish in 3rd place with 7:35.1. It will be interesting to see how quickly Lucy and all our other middle distance athletes will go in fairer conditions! Maire also looked much improved over the barriers, even the gales, to win the B string event.

The sprinters kept the team manager busy; Annie Tagoe unfortunately injured her hamstring in the warm up for the 100m so it was all change to the team. Tayla Brade moved up to the 100m A string and ran a season’s best of 12.00 for 6th place. Making her debut for the team, Izzie Stanway was also a last minute change to the team and ran her best ever 100m race in a great time of 11.88 to win, which is remarkable as she has only recently recovered from a long term injury and her PB coming into the season was only 12.33 – Izzie is a great addition to the sprint team – we are all looking forward to see continue to improve. In the non-scoring 100m race, Grace Andam ran a windy PB of 12.60 to finish 3th. Captain Zoey Clark, destroyed the field from lane 8 by over a second to win in 53.91 – who knows what time Zoey would have ran if there was no wind! Michaela Mayor, still with her 800m in her legs from 40 minutes before was clearly inspired by Zoey’s run, ran a determined 400m B string to finish a fantastic 5th place in a good time of 61.30 considering the conditions. Michaela then went on to run a fantastic 58.2s split for the first leg of the 4x400m (more on that race later), to win TVH’s Club Athlete of the Match, which is a new award for this season similar to the men’s BAL team Clubman of the match award. Less than an hour later, Zoey Clark broke her windy PB in the 200m, to run a blistering 23.62 to place 3rd. Zoey was backed up by club stalwart Angelita Broadbelt-Blake who was a late change to the team due to a late injury to Tayla who was going to deputise for injured Annie. Angie ran a very good 200m race place 2nd in the B string with 24.88 less than half an hour after winning her 100m hurdles race.

The throwing events saw the surprise return of Emma o’Hara to the team who managed to change her flight from America during the week to make sure she was available to compete in Edinburgh. Still a little jet lagged, Emma struggled with the wind but still threw 49.98m to claim 5th place in the A string. In the B string Christina Furlong also struggled a little with the wind but did very well to finish 4th with 42.02m. Laura Britane and Carla Letheby were the selected duo for the discus and both were close to their best with throws of 44.01m and 38.80m to come 4th and 3rd in their respective strings. Laura and Carla were joined by Olga Kotmilosi in the javelin. Laura just missed out on victory against a Portuguese Olympian by 20cm, finishing 2nd with a throw of 44.91m. Olga scored maximum points in the B string javelin with 39.57m and Carla as a guest did well to throw over 30m too. The shot putt saw TVH’s final debutant of the day, Danielle Opara, after a long wait for the discus to finish Danielle claimed 6th place in the A string with 12.70m – we look forward to seeing her develop into another one of TVH’s top athletes in the coming years. The B string saw our new Life Member, Phyllis Agbo make up for her disappointing high jump with a good shot putt competition with 11.49m to claim 2nd place in the B string. 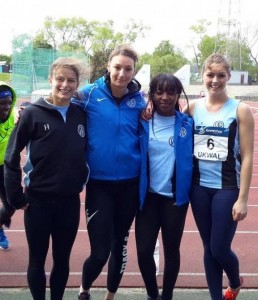 The last track events were the relays. The team manager was delighted still to be able to put together a sprint relay team after the injury problems earlier in the day; Claire Taylor and Zoey Clark volunteered to take on the last two legs, joining Grace Andam and Isabelle Stanway in the team for the first time. With safe changeovers and very fast sprinting in between, the team successfully brought the baton home safely in 3rd place in a great time considering the wind of 48.12 which incidentally is less than 0.3s off the club record. Although there were some tired legs, the 4x400m quartet of Michaela Mayor, Angela Barrett, Lucy Ferguson and Zoey Clark also did not disappoint with captain Zoey once again running a fantastic final leg to chase down a 20 meter gap from 7th place to bring the team home in 5th place in a time of 4:00.04. There were many candidates for the TVH Track Athlete of the Match but for her remarkable efforts in winning the 400m, great runs in the 200m and legs in both relay this final award had to go to Zoey Clark.

Thanks to everyone who has helped make the Edinburgh trip so enjoyable for the team, including our point scoring officials Alan Ferguson, Wendy Letheby, Joanna Mobed (timekeeping for the first time at the UKWAL), Marion and Dave Huffer. With another great team effort in the next match in Birmingham on Sunday 12th July TVH we will have a great chance to claim the title of the best ladies team in the UK at our home match on Saturday 8th August. Up the Valley!