Much has been made in the media of late about the turbulence in UK politics as the drama unfolds day by day, hour by hour.  In the process of reporting this, such outlets have largely neglected what is surely the ultimate question.  Who is best placed to win the TVH Endurance Cup?  Monday 11 July saw the latest instalment played out in Battersea Park. 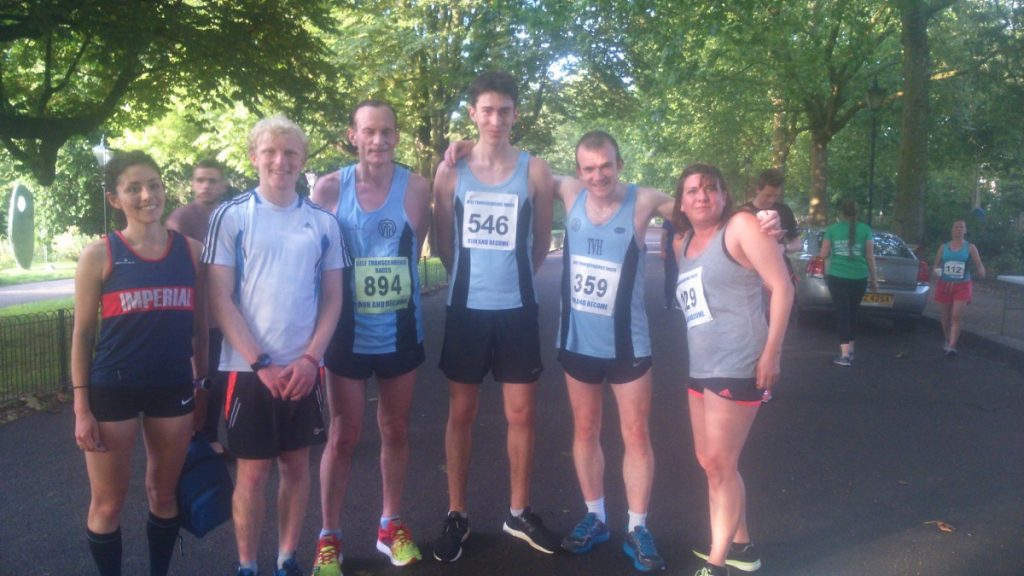 5km is not especially common as an advertised race distance so Run Britain showed many competitors recording PBs in the field as a whole (because they hadn’t done many 5k races that had been packaged so).  In fact, as Parkrun is (meant to be) 5km and as the metric mathematicians amongst you will know, 5,000m also is, between us as a team we had a fair amount of relevant experience.

So on a sunny if slightly breezy evening the Sri Chinmoy Self Transcendence 5K got under way with a warning by the officials that earlier rain might have made the course a little slippery and to watch out for dogs (who might also have…).  The Parkrun is excellent training in so many ways.

First home, not just for TVH but in the whole field, was Chris Thomas.  In a close finish, the Man of Kent Imperial student came home in a season’s best 16:11, only fourteen seconds short of his PB and earning him a tidy 20 Endurance Cup points.  Well done!  Next in for the Valley was promising u17 Jake Hooley.  20th overall with a PB of 17:53 (nineteen points).  To make it a really great evening for the club, Sarah Johnson, also of Imperial, was third woman with a season’s best 18:37, placing her 34th overall (20 points), congratulations!  Paul Woodgate came in 44th with a PB of 19:05 (eighteen) whilst TVH’s super v50 Richard Hooley registered a PB of 19:07 and 46th place (seventeen).  Completing the Valley contingent, Christine Munden ran a defiant 29:32 in 154th, collecting nineteen Endurance Cup points.

For Chris Thomas the spoils of victory did not end with the points.  Was he given a clear run to be PM?  Would that actually be a prize?  I digress.  No, he was presented with a pineapple by the race organisers.  Next time you’re out training, forget the bling, medals are so cheap.  Pineapple is the new gold. Finally, a big thank you to Alex Mundell for her top support on the night.  It really makes a great difference to people competing when they get some encouragement from the road/trackside.

See you all for the next stage; the Elmbridge 10k on Sunday 24 July!