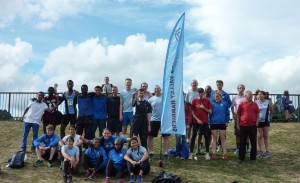 Congratulations to all members of the Southern Athletics League team, including athletes, officials, team managers and other helpers. It was a great team performance over the season that included 4 wins and a 2nd place to win the league!

On the first Saturday in August an undefeated TVH Southern League team made it’s way to Parliament Hill, as Highgate Harriers played host to the 5th and final Southern League match of the season.

As luck would have it the match included the top 2 teams in the league, TVH and 2nd placed Milton Keynes, and it proved to be a very close match as both teams fought to win the 2 available promotion places in Division 2 North up to Division 1 next season.

Milton Keynes eventually won the head-to-head battle on the day with a final match day score of 212 points, just 8 points ahead of TVH on 204 points in 2nd place.

With TVH having started the day with a 1 point advantage in the league, this meant that both teams finished the season on 19 league points and both won promotion to Division 1 next season.

However it was the Valley’s greater total of match points won over the season that ensured they won the league title and are crowned champions of Division 2 North.

For the final match of the season the Valley men and women pulled out all the stops to ensure that they would win promotion at Parliament Hill, with the men managing to cover every event on the day it meant that they had done so for all 5 matches of the season, a fantastic achievement which also played a large role in helping to win the league title.

With the weather warm and partly sunny it provided good conditions for most events, though the long distance runners would have preferred slightly cooler conditions for the 5k and 2k steeplechase on the track.

With plenty of good performances and victories to choose from for the Valley men, highlight’s included season’s bests for Keano Paris-Samuel, 23.0s in the 200m, David Jerzykowsi, 48.63m in the javelin and Ali Mortimore, 39.92m in the hammer.

There were also 2 pb’s on the day for Michael Adekunle, who equalled his 1.90m pb in the high jump, and Odell Okwuosa, who jumped a new pb of 12.20m in the triple jump.

Junior athletes also played their part on the day, with a trio of U17 athletes making their Southern League debut, which included Tyrell Mills-Rhule in the 100m, Keano Paris-Samuel in the 200m and Cassius Rathbone in the 400m.

The club Man of the Match award for the overall best performance on the day was won by U17 athlete Odell Okwuosa, who made a giant leap forward to improve his triple jump pb by 58cm with a jump of 12.20m to easily win the B string.

For the first track event of the day the Valley men were without any recognised hurdlers, so Bai Bai Conteh stepped in for the 400m hurdles A string to finish 4th in 69.5s, while Phil Wetton finished 3rd in the B string in 81.7s.

Senior men were in short supply for the sprints with just Kerry Mathurin available on the day, but junior U17 sprinters Tyrell Mills-Rhule and Keano Paris-Samuel both made good Southern League debuts.

Tyrell did well on his debut to earn 3rd place in the B string 100m in 11.8s, while in the 200m Keano Paris-Samuel just missed out on his first sub 23s timing but still equalled his season’s best to win the B string in an impressive 23.0s.

Decathlete Mike Bartlett was another making his Southern League debut and he had a busy day taking part in the pole vault, discus and 110m hurdles.

In a competitive 110m hurdles Mike did well to finish in 3rd place in a time of 21.0s having only just finished the pole vault and he was ably supported by Bai Bai Conteh who won maximum points in the B string in 20.7s.

Injury and other commitments had once again robbed the men’s team of their one lap athletes, so 800m specialist Mohamed Jebari El-Majdoub (known as MoJo to his team mates) stepped in for the 400m to make an impressive Southern League debut with a time of 51.5s for 2nd place in the A string.

Another 800m runner making his debut was junior U17 athlete Cassius Rathbone and he also stepped down to the shorter distance to record a time of 59.5s for 4th place in the B string 400m.

Kieron kept himself busy in another tactical race for the 1500m to come home in 3rd place in the A string in a time of 4m18.5s, while Andrew Mitchell made his debut over the distance and recorded a good time of 4m32.1s in a close finish for 4th place in the B string race.

In the 2k steeplechase Robert Vallance and Paul Woodgate both made their debut over the distance and in a quick race Robert’s time of 7m04.7s saw him finish 4th in the A string, with Paul also 4th in the B string in 10m00.2s having already completed a non-scoring 5k earlier in the afternoon.

The evergreen Steve Norris once again took to the track for the 5k for 3rd place in the A string in a time of 17m02.9s, while in the B string Paul Heaphy made a welcome return to the team and his season debut after a long injury and did well for 3rd place in 18m27.2s given his lack of fitness.

With the relays concluding competition on the track it was a combination of youth and experience that formed the Valley’s 4x100m relay team, which included 2 U17 sprinters Tyrell Mills-Rhule and Keano Paris-Samuel alongside sprinter Kerry Mathurin and long jumper Ogo Anochirionye for a good 2nd place in 44.3s.

In a closely fought 4x400m relay 800m runners Kieron Sexton and Mohamed Jebari El-Majdoub teamed up with Bai Bai Conteh and U17 triple jumper Odell Okwuosa to produce a time of 3m38.5s for 4th place.

Events in the field began with the men’s shot and Steve Whyte and Ali Mortimore once again proved their value to the team with comfortable wins in the A string for Steve and B string for Ali with distances of 13.56m and 11.68m respectively.

They repeated this success with maximum points in the hammer, Steve winning the A string with a throw of 52.24m and Ali threw a season’s best of 39.92m to easily win the B string.

In a very competitive javelin competition David Jerzykowski threw a season’s best of 48.63m for 2nd place in the A string and Joe Bibby threw well to record 41.43m for 3rd place in the B string.

In the jumps first up was the high jump and a very good performance from Michael Adekunle saw him equal his pb with a jump of 1.90m for 2nd place in the A string, and alongside Michael was Steve Edwards who cleared a height of 1.70m for 3rd place in the B string.

With the Valley’s top 2 vaulters in the pole vault they dominated the competition and took maximum points as Mike Bartlett cleared 3.80m to win the A string and Stan Vilga cleared 3.60m to win the B string.

Maximum points were also the order of the day for the Valley’s long and triple jumpers, and jumps of 6.62m for Ogo Anochirionye and 6.11m for Steve Edwards saw them win the A string and B string respectively in the long jump.

With TVH and Milton Keynes having been neck and neck all day the final scores revealed Milton Keynes as the match winners on 212 points and TVH just 8 points behind on 204 points in 2nd place, Highgate Harriers 3rd on 157 points and Ipswich 4th on 151 points.

It was another great day of athletics for the Valley’s men and women and despite just missing out on the match win the result ensured they finished the season as league champions and earn promotion to Division 1 next season.

Winning the league title made it a memorable season and the team can now look forward to competing in the top division of the Southern Athletics League next year.

Congratulations once again to all those involved and the best of success in Division 1 next season!

Up The Valley,
Phil.