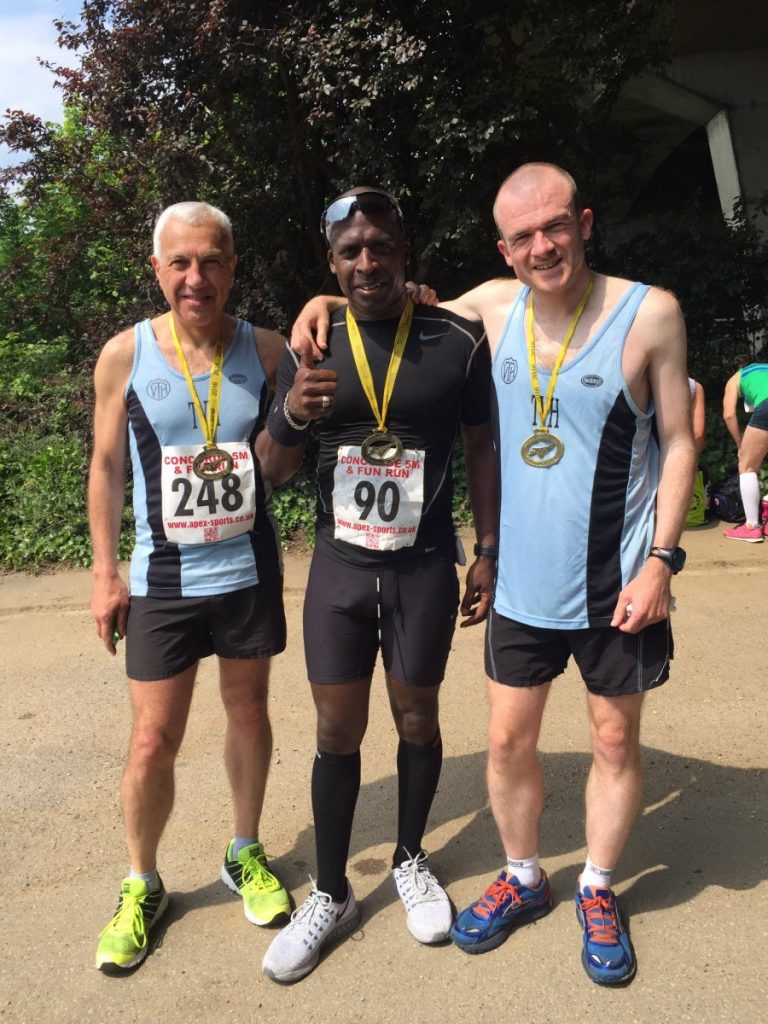 It was an already warm morning as five TVH runners and a couple of hundred others gathered in Heston for the annual Concorde Five Mile.  The race got away soon after the advertised start time of 10:30 in the pleasant surroundings of Cranford Park.  The Concorde Five follows one large loop and is a fairly flat course, barring a ramp up onto the A312.  You cross the M4 a couple of times, thankfully under and over.

The unseasonably hot conditions made it somewhat hard going.  Steve Norris came in close to the front and claimed the prize for first v40.  He was very pleased with his vouchers*.  Richard Hooley, our super-fast v50, was second home for the Valley in eleventh place, getting around the course in just under 32 minutes.  Paul Woodgate completed the team score in twelfth, taking three minutes off of his pb with 32:11.  This earned TVH the runners up spot in the team event; each member was invited to collect a bottle of wine from a generous table of prizes.  Next in for the Valley was Nick Michael, our leading v60 in long distance collecting seventeen points in the TVH Endurance Cup.  On Sunday he was, as ever, truly a team player, giving Paul Woodgate a lift to and from the remote location*, also pacing Christine Munden to a great sub 50 minute time, for which she earned a deserved 20 points in the women’s section of the Endurance Cup.

Members from around a decade back might recall Rowan Saunders, who is still running and said hello.  TVH also supplied officials for the event, including Barrie Saunders.  Without the officials, there’d be no race.  Overall, the Concorde Five Mile is well organised by the BA Sports & Social Club, a friendly run that’s well worth keeping on the Valley calendar.  The next event in the Summer Endurance Cup Series is the 5k in Battersea Park on Monday 11 July.  Until then.