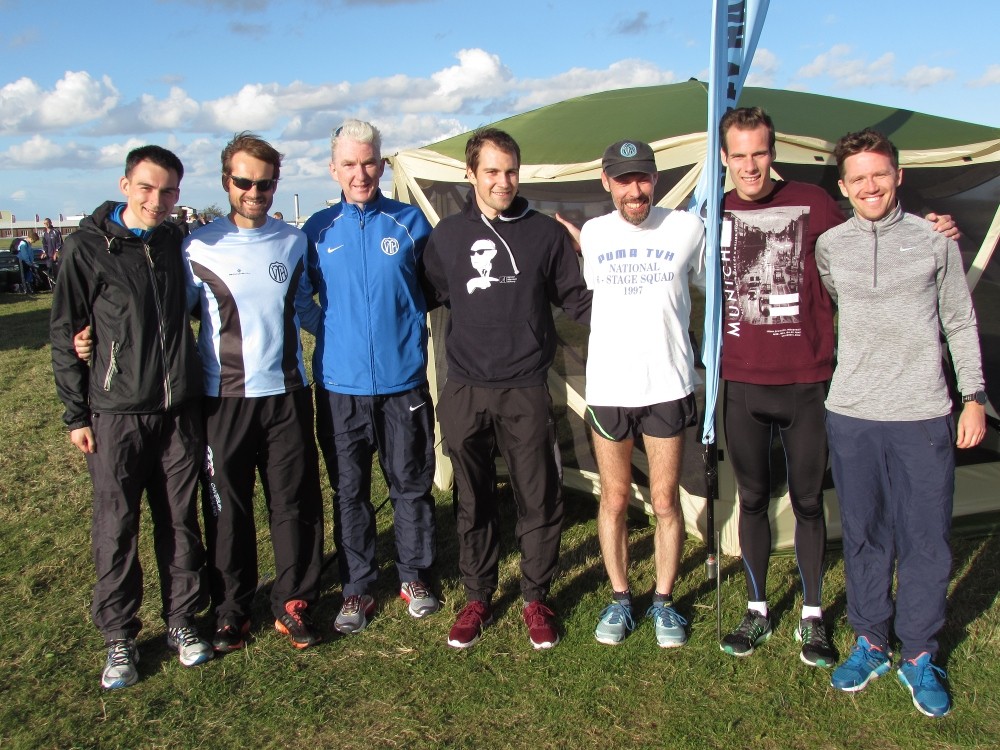 It was a new course and new venue for Sunday’s South of England Road Relay Championships as the Valley’s senior and veteran men went on the road to Bedford Autodrome.

In the senior men’s 6 Stage Road Relay there were a number of road relay regulars who couldn’t race, but some good performances from the team saw them finish in 36th place out of 57 finishing teams.

The veteran men’s 4 Stage Road Relay included a Valley V40 team which was also missing some key relay men and an 11th place finish out of 13 finishing V40 teams was a good result on the day.

The senior men travelled with an 8 man team with Julian Koett and Artur Domingos making their road relay debut for the Valley, while the veteran men had a 4 man team racing in the V40 age group.

A break from the traditional autumn road relay course at Aldershot meant a trip to a new venue outside Bedford and a new course around a motor racing circuit at Bedford Autodrome.

The weather held good all day except for a very strong wind, and the warm and dry conditions did create a few hotspots around the course, though these were outnumbered by the parts of the course which suffered from strong headwinds due to the exposed nature of the racing circuit which offered no shelter from the wind.

Despite running against a strong headwind for over half of the 6km lap there were still some fast race times on the day, as Antonio Silva proved as he started the race on 1st leg for the senior men’s 6 stage team with a very fast time of 17m 48s, the fastest Valley time of the day and also the 18th fastest overall time in the race, which placed him high up in the field in 10th place at the end of the 1st leg.

On leg 2 Conor Kissane-Wood was looking to reproduce his excellent form from his best ever summer season on the track and he didn’t disappoint with a great display of powerful running which earned him the very good time of 18m 48s and 14th place in the race.

Leg 3 saw the welcome return of Calum Nicol onto the team, who having joined TVH as a promising junior athlete is now beginning to take-up where he left-off in the senior ranks, and a good time of 20m 41s showed he’s going in the right direction to place the team in 23rd place at the halfway stage of the race.

Making his Valley debut on leg 4 was Julian Koett, a strong middle distance runner on both the road and track he didn’t waste any time in proving his worth around the racing circuit, as he produced a very good time of 19m 49s to move the team into 22nd place.

Scott Brewer is another athlete building on a successful track season and on leg 5 he continued his improvement with a time of 23m 09s for the 6km lap to see the team in 33rd place with 1 leg to go.

Valley veteran Steve Norris once again provided the finishing touch on the 6th and final leg, and his years of experience in the road relays brought him a good time of 21m 49s to bring the team home in 36th place out of 57 finishing senior teams.

Racing on the senior men’s B team were 2 athletes with very different experiences of the road relays, as experienced relay runner Manuel Da Silva was joined by junior U20 athlete Artur Domingos on his road relay debut.

Starting the race on 1st leg Artur managed to navigate his way through the wind in a time of 30m 08s to finish in 72nd place, and despite a lack of training Manuel produced a better than expected time of 23m 22s to move up to 67th place as he crossed the finish line.

In the veteran men’s 4 stage road relay lining up on 1st leg for the Valley V40 team was Richard Hooley, who had to contend with a crowded start line as both the senior and veteran men’s races were starting alongside each other in this year’s race, and he did well to maintain a good rhythm for a time of 24m 15s and 15th place in the race.

Taking over on 2nd leg was team manager Phil Wetton, and despite a lack of fitness he managed a time of 24m 30s which moved the team into 12th place at the halfway point in the race.

On leg 3 David Ford did battle with both the course and the wind and managed to come out on top with a time of 26m 14s to keep the team in 12th place with just the 4th leg remaining.

For the 4th and final leg Greg Bennett put on a fine performance to produce a time of 22m 45s, the fastest V40 Valley time of the day, to bring himself and the team home in 11th place out of 13 finishing V40 teams.

With all the races finished there was just one last result to decide, the winner of the Valley’s own Southern Road Relay Trophy for the fastest handicap leg on the day.

In a close competition it was Conor Kissane-Wood who lead the field by a 20s margin to win the handicap competition and the trophy with a handicap time of 17m 28s – Congratulations Conor!

Many thanks to everyone who raced on the day and to all those who came out to support the team, the more support we have on and around the team the stronger it will become!