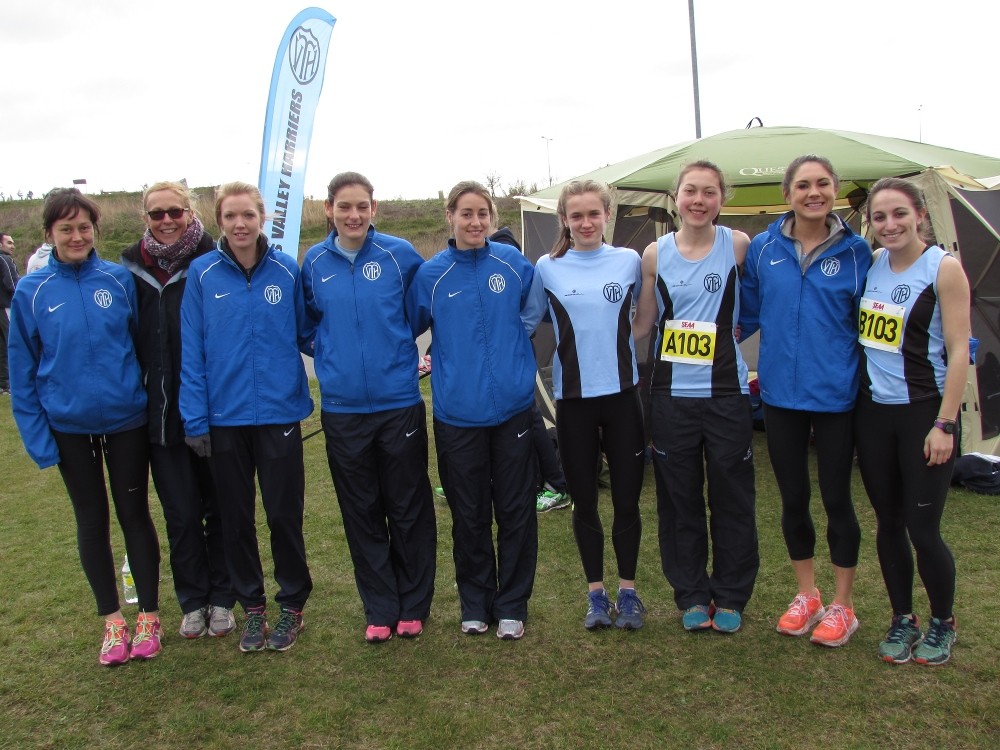 TVH ladies put in a fantastic team effort, with athletes returning from long term injuries and there were some late changes to the team.  All things considered, the TVH ladies performed superbly to place 4th for the second consecutive year and it was brilliant to complete two teams of six athletes. It was a new venue away from Milton Keynes, held at the fast but undulating Cyclopark in Gravesend, where long legs were introduced for the first ever time.

800m/1500m athlete Izzy Dye, who has moved up through our junior teams, was a very late addition to the team. Izzy won the U20 800m at the Middlesex indoor championship the day before and the team were delighted that Izzy changed her plans for Sunday (where she should have been winning a 1500m medal at the indoors), to help the senior team out. Izzy had a fantastic race around the testing Cyclopark course to bring the team home in 5th place on leg 1 and in a superb 8th fastest time overall, clocking 15:25 (4.4k).

Next off was Scottish international Fiona Thompson due fully moved up from a short leg to a long leg (6.6k) to accommodate the last minute changes to the team. Fiona did well to gain one place and move the team up to 4th with a fine run of 23.20 for the 13th fastest overall long leg of the day.

Then saw a fantastic return to racing from former GB mountain runner and English Schools cross country champion, Heather Timmins, after a three year absence due to injuries. Heather absolutely blitzed round the testing two lap course to take the team up to 2nd place and to clock the 6th fastest time of the day (fastest on leg 3) with 15:12.

Another athlete who is still managing her long term hip injury is track superstar Emily Shearer. Emily, who is unable to undertake any speed sessions in training, had a powerful and controlled run out on a long leg to keep the team in medal contention, handing over in 3rd place with the 6th fastest leg on leg 4 (23:37).

Everyone was delighted to have cross country captain Siana Jones on board for leg 5. Despite having a horrible cold all week and a being moved out of the B team last minute, Siana gave it everything out on the course. Siana showed great determination to be the 9th fastest on leg 5 with 16:57 and to only be taken by one team, coming home in 4th.

On leg 6 was Lisa da Silva who has not be able to train since January due to a knee injury. With an U23 GB international ahead (running for Aldershot) and a medal in her sight, Lisa somehow managed to dip under 6 min/m for the first time since the summer to keep the team in 4th place and was rewarded with the 7th fastest final leg of the day (16:23).

Well done ladies, that was a valiant team effort!

The B team runners also did themselves proud and adapted well to some last minute leg changes. Imperial college student, Leanne Lyons, fresh from her multi-events at the London College Series the day before ran around with a great smile to bring the team home on leg 1 in 22nd overall and as 2nd B team. Leanne was the fastest of TVH B team runner of the day in 17:17.

TVH’s second Imperial College athlete, Alex Mundell, also had a strong run out on a long leg to maintain the team in 22nd and as 2nd B team in a good time of 26:30.

Diana Kennedy is another athlete returning to the team after long term injury and has only been back running for two weeks. Diana did well to only drop three places with a fine run of 19:19.

Next up was ever reliable and always smiling Barbara Maddison who ensured the we had a complete B team by accepting to run the night before had an enjoyable run of the three lap course to bring the team home in 30th with a time of 34:05.

It was also pleasing to see Eve Goodhart (U20) racing again for the senior team. Eve did very well and was TVH’s second fastest short leg runner for the B team with a well-paced run of 19:05.

Christine Munden then brought the team home in 30th in a time of 23:57.

Well done again to the ladies team’s on their fine performances.