The TVH ladies middle distance squad excelled yet again, securing their status as one of the very best teams in the country with a 5th place finish at the National 6-stage road relays in Birmingham on Saturday.

With a change to the usual format (this year comprising two long legs and four short legs) and an extra hill near the start, it was unknown how we would fair, but 5th place definitely exceeded expectations and is the squad’s best ever performance in this competition! 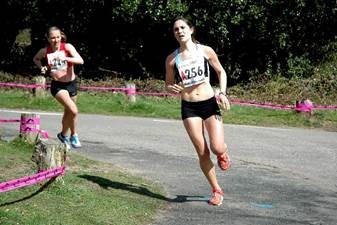 As with all events, there were the usual late changes to the team. It was less than 48 hours before the gun fired that the squad was finalised. However, the last minute addition of Emily Shearer (Emmy pictured above) proved to be a gem. Fresh off a plane from Geneva and out on leg one, the TVH debutant contended the 5.6 mile course in style (3km longer than Emmy had ever raced before). Emmy battled it out against some of the top athletes in the UK to bring the team back in a fine 14th place (in a time of 33.13) out of 52 competitors. Emmy, returning from injury, is no stranger to highly competitive situations. She has clocked some very impressive track times over in the states, including a 9.11 3000m personal best. We look forward to seeing many more great performances from Emmy in the future!

As a strong wind was picking up (that actually blew the club tent over more than once) it was Tracy Barlow’s turn to cover the undulating 5.6 mile course. So, a couple of miles in and there was no stopping the marathon runner as she whizzed past six runners, including friendly rivals Belgrave Harriers, to bring the team into the top 10 in a fantastic 8th spot (in a time of 32.24, 14th fastest of the day).

Then it was over to speed demon Fiona Thompson on the first of four consecutive ‘short’ laps of 3.2 miles. Fiona quite simply smashed it, picking up three more places and clocking the 7th quickest time of the day (17.47). It was Fiona’s run that really cemented the team position for the remainder of the race, as she handed over to team manager Lisa da Silva in 5th. Lisa, although no stranger to the delights of Sutton Park, found the going tough and in her words had a ‘bit of an off-day’. With no athletes in sight and with no choice but to keep going as quickly as possible, she got the job done holding on comfortably to 5th place (in a time of 18.54). Next out was 800m runner Katie Mellor, who on the return from a long-term injury ran very well in the tough conditions. Katie started out hard and paid a little on the outer part of the course but fell right back into her stride on the downhill section toward the finish, to hand over to GB triathlete Lucy Smith in 6th place (in a time of 20.23), now neck and neck with Birchfield Harriers and Belgrave Harriers.

It was Lucy’s first road relay for the club and boy did she have a good run. Strong from the outset, she remained focused on the task in hand with a top Birchfield Harrier athlete alongside her. They caught and overtook the Bedford athlete who started with a three minute  advantage, whilst lapping other runners along the way. This gave Lucy the confidence to sprint away from the Birchfield Harriers athlete in the closing stages, beating her to the line by five seconds (in a time of 18.31).

The ladies finished a fantastic 5th place overall, which can be broken down into an impressive 4th English club, 2nd Southern club and top London Club – amazing! Kirsty Addy’s post-race cakes were a massive added bonus too.