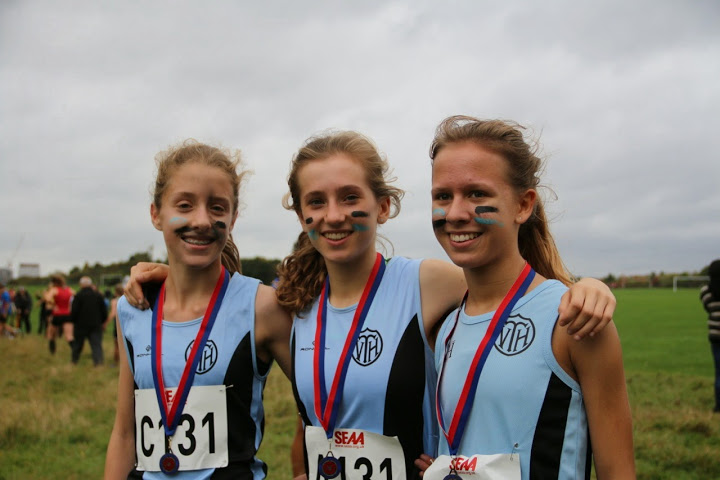 Sadly Kosana Weir had flu after winning last week’s Metropolitan League race and was unable to take part in the South of England cross country relay championships. This did not stop the TVH girls gaining third place in the Under 15 race. The strength in depth of the Valley squad enabled Alice Harray to fill the gap and the girls only to lose out to two very strong teams, Herne Hill and Blackheath. India ran superbly on the first lap and came home with an 11 second lead. Verity Walker then held on to the lead although the margin was reduced to eight seconds. On the last lap, Alice was soon caught by the Herne Hill runner but when Blackheath passed her she was just unable to hold her off and finished very close behind for third place.

The last time TVH girls won South of England medals was at the 2002 championships at Parliament Hill when the Under 17’s also collected bronze. Let’s hope that we don’t have to wait another 12 years for more major championships medals! The depth of the girls was shown when the ‘B’ team finished 17th. With Olivia Olsher taking the first lap having a good run to finish in 14th place. Then Iona Pernthaller carried on the good work to finish 13th Arriving just in time to run the third lap Rosie Vallance had no time to prepare before her run and naturally was disappointed with her 17th place. The third team of Rose Barkle and Sarah Goodhart was then incomplete due to the runners moving up to fill Kosana’s place and they finished their laps in 32nd and 31st positions.

The Under 13 girls team was yet another new combination of girls. With Charlotte Buckley running the third lap it was hoped that Philippine Pourpart-Lafarge and Arianna Alonsi-Bizzi would not lose too much ground on the leaders. In fact, Plilippine finished 25th and Arianna was having her first cross country race for the club and finished 27th. Unfortunately she ran in trainers and couldn’t get a grip on the wet parts of the course. Charlotte then ran through the field to pick up 16 places to bring the team home 11th. For once, Charlotte only had the second fastest lap time, just two seconds behind Kirsten Stilwell of Wycombe. Charlotte Cooney-Quinn struggled in this standard of competition and came home 43rd on the first lap. Our lone runner in the Under 17 Women’s race, Eve Goodhart ran a respectful 9:17 but was down in 18th position at the end of the first lap.

The under 13 boys were fortunate to have George Goodhart available and along with new member Tane Robinson were able to finish a team. Guy Kaye led off and found the 2000 metres too short for his style and finished 25th. George then moved the team up to 17th before Tane finishing in 22nd was having a good first race for the Valley.

Unlike the girls, when a Under 17 men’s team runner failed to appear, the reserve runner James Horrex, came in last on the first lap and Alex Khlaf and Karim Mahiddine were unable to get the team back in contention. The Under 15 boys team had Max Buckley finishing the first lap in 14th place, just ahead of ‘B’ team’s Jake Hooley, 18th. Louis Medd ran well to finish 13th and hand over to Lucillo Burrell who greatly improved the teams position to 9th.