The club celebrated the 25th anniversary of the first competitive fixture for our women’s team at our Awards Evening in the clubhouse on Weds 21st Nov 2018 with the presentation of a new annual award, the Maz Ralph Trophy.

The award was very kindly donated by Ray Culberson, the Club President at the time who helped set up the team to first compete in April 1993.  Ray also helped the celebrations by documenting  those early days of the team in 1993 in a fascinating article from his home in Vancouver Island, Canada.  From their first track & field fixture in the Southern Women’s League Division 4 at Walthamstow the rise of our women’s team to winning the UK Women’s Athletics League Premier Division in 2015, 2017 and 2018 has been phenomenal.

The award is named after Maz Ralph, whom Ray recruited as a coach and then the first team captain and one of the first women members of the club. As Ray says in his article: “Maz, with her trusty assistant John Smith, was instrumental in setting the foundations for the incredibly successful women’s side of the club.”

In the team photo below from 24th April 1993, Maz is in the bottom row centre with Ray on the right,  Dave & Marion Huffer and John Smith, who were all at the 25th anniversary celebration and still very much involved with the team, are in the back row. 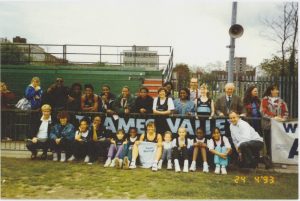 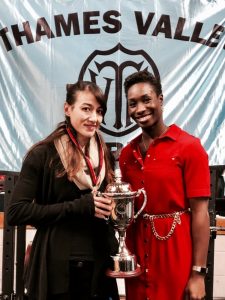