For once this doesn’t mean people looking miserably out of their front windows as the rain comes lashing down.  Actually, it was a lovely warm sunny Bank Holiday, the blue being the light blue of Thames Valley Harriers enjoying a very good morning’s running.

The Vitality London 10,000m has a rather misleading name as it is actually a road race.  It’s been going since 2012, counts as the British 10k Championship and is run around quite a fast course.  With over 14,000 starters, The Mall and neighbouring Green Park were very busy.  It must be quite an operation getting everyone lined up ready for the off.  Dame Jessica Ennis-Hill was in attendance to fire the starting gun.  After some of the elite athletes were introduced, the contest got under way.  The large number of entrants, ranging in ability from Mo Farah to someone who finished in 1:54:26, meant that the early stages were quite congested.  This is perhaps reflected in the fact that eleven out of the twenty TVH athletes who took part got negative splits, managing to speed up as they got clear of the early crowding to tour The City, Whitehall and Westminster on a beautiful day. 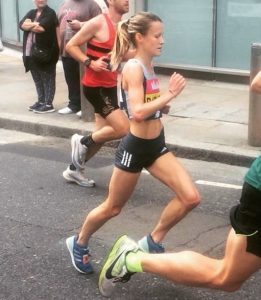 The Valley women have been very successful lately and they followed up their amazing fourth position in the European Club Champions’ Cup with a team medal here.  GB’s Tracy Barlow finished fourth in the women’s race (141st overall) with a new PB of 33:21 which also beats Ann-Marie McGylnn club record set earlier in the year by an impressive 34 second.  She was just nine seconds behind Jo Pavey and a bronze medal, beating British Marathon Champion Lily Partridge.  Well done Tracy, it looks like your preparations for the European Championship in Berlin are going just fine!  Next Valley woman was Sarah Johnson (36:40, 34th woman, 394th overall), a solid performance coming back from illness, followed by event debutant Stephanie Ainley (40:18, 115th woman, 837th overall), impressive resilience after a long journey earlier in the weekend.  Between them, the Valley women won the UK Athletics 10K Championship with a cumulative time of 1:50:19, winning a share of a £2,000.  Orange juices on you next time!

The other TVH athletes were led by the rapidly improving Mohamud Aadan, fourth overall in a new PB of 29:58.  Mo has already represented Great Britain this year at the World Half Marathon Championships and ran a well judged race here, finishing just fourteen seconds behind Sir Mo Farah.

Congratulations everyone, those twenty performances included ten PBs or event debuts.  Thanks ever so much to the supporters, led by Phil Whetton, also including Paul Oppe, Diane Oppe, Naol Abagibe, Alex Mundell, Jessica Bass, Siana Jones, Fraser Brydson, Ben le Rougetel and Nick Michael.  It means so much to those running to have friendly faces/voices cheering you on!

…and what this all means

Never mind British or European Championships, the real impact of this 10k is that it’s another leg in the long, hard race for the Ron Hopcroft Endurance Cup.

Mohamud Aadan’s gutsy run which saw him finish just fourteen seconds behind Sir Mo Farah gets him the twenty points and a share of the lead with Rob Collins.  Daniel Garcia-Rasines’s 34:43 sees him move into third spot overall.  Ryan Keane, Paul Woodgate and Jonathan Baird maintain a healthy interest in the contest and are just below in the standings.  The Vitality London saw several new entrants to this year’s competition, the highest placed being Myles Edwards, whose impressive debut over the distance saw him jump straight into the top ten.

Fancy getting your hands on the Cup yourself?  Fear not, there is still time!  Just enter the next race in the Ron Hopcroft series, the Concorde Five Mile, a very well organised but also very friendly local race at which there’s always a good Valley turnout with prizes often brought back.  Full details here http://www.barunner.org.uk/Event_Concorde.shtml

For the full forward schedule see here – Ron Hopcroft Endurance Cup.  Please note the change in which Sri Chinmoy race will be stage five of the series, this is owing to the originally scheduled race’s clash with the Southern Athletics League.  Until next time…