An annual trip to Mansfield for the English National Cross Country Relay championships saw an improved performance on last year’s race for both the Valley men’s and ladies teams on Saturday. 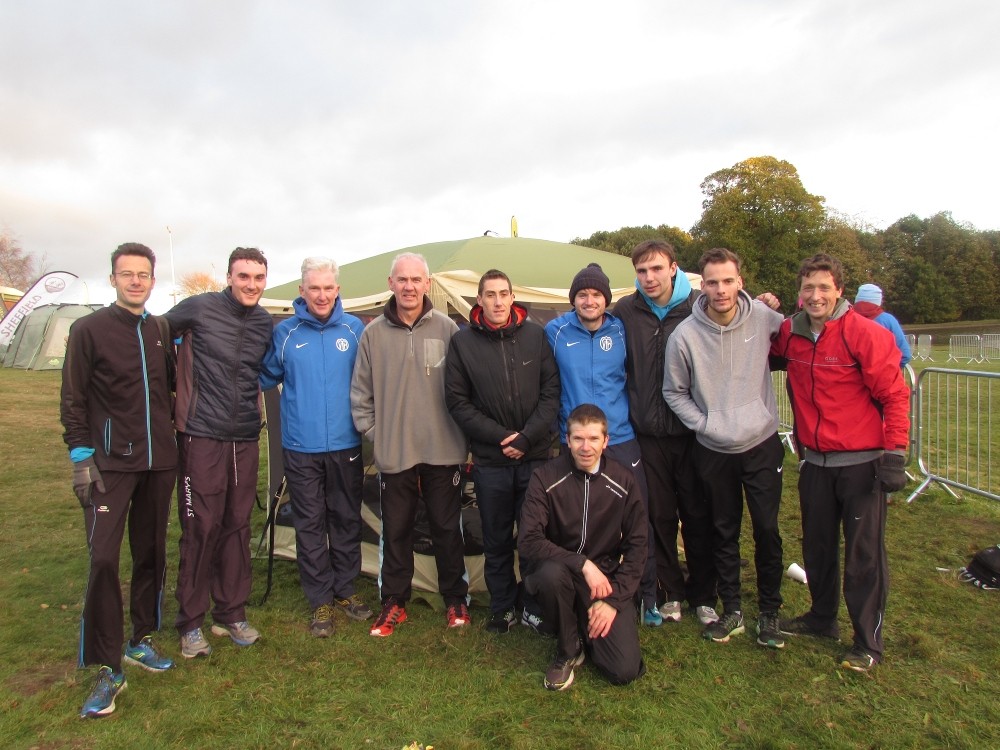 The standard and size of the field continues to increase in both races and a strong men’s team performed well to match their 2012 result of 23rd place out of 166 finishing teams, while a ladies team missing some star athletes also did well to finish inside the top 30 in 28th place out of 123 finishing teams.

The weather held good on race day as dark threatening rain clouds were blown away by the cold wind, while sporadic bursts of sunshine kept the temperature bearable despite the constant wind chill.

With the rain clouds banished this ensured a dry and fast lap around Berry Hill Park with firm ground underfoot apart from small patches of mud inside the woods.

Starting on flat grassland each lap continues into undulating woodland with plenty of twists and turns, followed by a lengthy uphill and downhill grassland stretch before turning back towards a short uphill dash to the finish.

The men’s race consisted of 4 man teams with each man racing over two 2.5k laps of the park, while the ladies race included 3 per team each racing over a large 3k lap of the park.

There was a record entry for this year’s championships and a very high standard overall. The team (Heather Timmins, Lucy Smith and Lara Scerri) represented a complete change of personnel from the Southern Cross Country relays of two weeks earlier.

All three ladies are fighting back to fitness following sustained injury lay-offs and the signs are good that faster times lie ahead.

Heather was first to go on the very competitive first leg and despite not feeling well, she established the team well inside the top quarter of the field in 24th with our fastest leg of the day.

On second leg Lucy followed her excellent run at the National Road Relays of a month ago by taking another giant step forward on her road to recovery picking up four places to put the team inside the top 20.

On the last leg 400/800m specialist Lara Scerri made a big step up in distance and looked strong as she brought the team home in 28th.

With the men’s race growing in popularity over recent years there were nearly 200 teams lined up on the start line for Saturday’s race.

Of the 4 Valley men racing for the A team, 3 were making their debut over the Mansfield course, including Chris Smith starting on 1st leg.

Despite the busy start Chris used his valuable race experience to navigate through the field and around the course in double quick time to finish in sight of the leaders in 23rd place with an excellent time of 15m36s, the fastest Valley time of the day.

Up for leg 2 Conor Kissane-Wood has made significant improvements since joining the Valley earlier this year and in his first outing over the course only an over-enthusiastic start kept him from recording a faster time than his 16m33s, which was still a good time and good enough to keep the team in 31st place at the halfway point.

Antonio Silva was also new to the course on leg 3, but that didn’t slow him down as he worked his way through the field to gain an impressive 12 places and move the team up to 19th place with a fast time of 15m43s.

The last time that Andrew Walshe had raced at Mansfield was as a junior and he gave it everything over the 2 lap course on the 4th and final leg to record a good time of 17m04s and bring the A team home in 23rd place out of 166 finishing teams, a very good finishing position given that it was under 20s away from the top 20 and under 80s away from the top 10 teams.

Leading off on 1st leg for the B team Kieron Sexton was determined to better his time on this course from 2 years ago, and he wasted no time in chasing after Chris as the race began and was rewarded with a good time of 17m13s, an improvement of almost a minute to finish in 79th place.

On leg 2 it was Andrew Mitchell’s first time racing at Berry Hill Park, and despite feeling a little below par his time of 18m10s maintained the team in 79th place at halfway.

Going on leg 3 Robert Vallance had last raced at Mansfield in the junior relay 2 years ago and he did a very good job for the senior team to move up 14 places to 65th with just one leg to go in a good time of 17m24s.

Setting out on 4th and final leg Steve Norris is no stranger to the Mansfield course and he managed to produce a time of 19m30s which was just 1s away from last year’s time, to bring the B team home well inside the top half of the field in 67th place out of 166 finishing teams.

The Valley men also had a C team racing, but some changes during the week meant that there were only 2 men racing on the day.

On a steady 1st leg Phil Wetton managed to improve his time from last year’s race by 5s with a time of 21m10s to finish in 173rd place.

The ever-present David Ford took over on leg 2 and enjoyed a good race on his first time around Berry Hill Park to record a time of 22m36s and move up 1 place to finish the race after halfway in 172nd place.

It was definitely a good day’s racing to see both the men’s and ladies senior teams finish inside the top 30 teams in a national relay championships, well done to all those who were racing and also many thanks to those who made the long trip to give their support to all the teams.