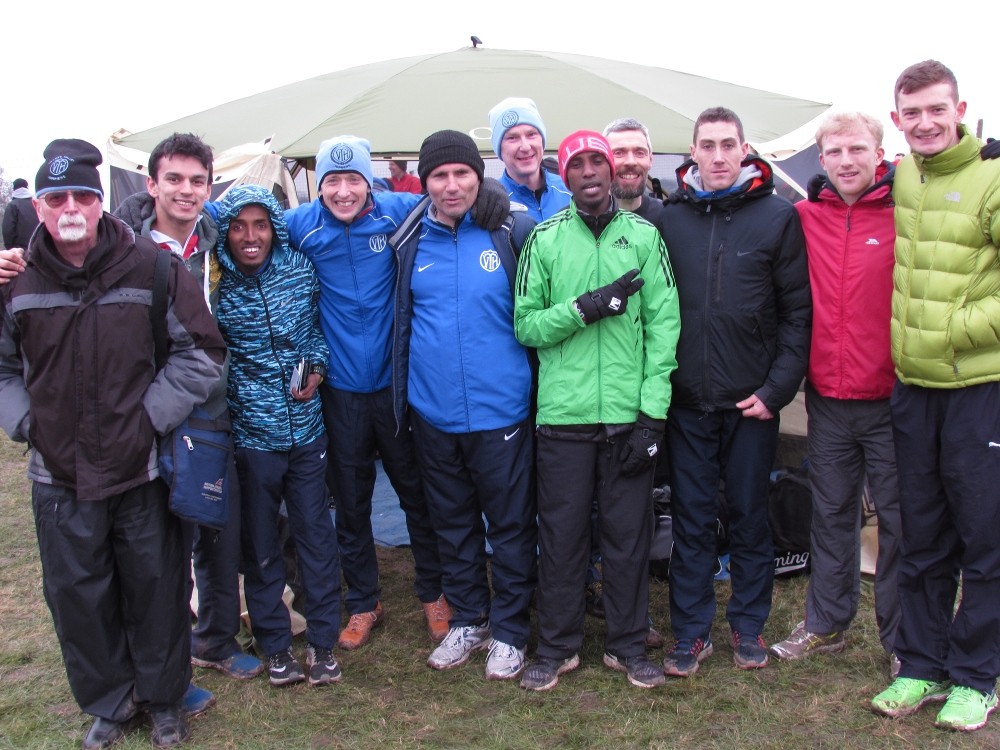 It was a good day at the English National Cross Country Championships at Donington Park with both the Valley men’s and ladies teams gaining a top 20 finish, the men’s team finishing in 20th place (13th place team counting first 6 TVH men) and the ladies team in 15th place.

There were some very good individual performances on the day with the highlights being the TVH men with 3 in the top 50, Antonio Silva 9th, Chris Smith 23rd and Mohamud Aadan 42nd, along with 2 in the top 70 for the ladies team, Emily Shearer 52nd and Sarah Johnson 70th.

Both TVH senior teams were well supported on the day with 15 racing for the men’s team and 6 for the ladies team, while Robert Vallance did well to finish in 81st place out of 152 finishers in the U20 men’s 10k race as the only member of the Valley’s junior men’s team.

With a large turnout for last year’s men’s race at Parliament Hill of 2,005 men and 145 teams, this year’s race at Donington Park near Leicester saw 1730 men and 123 teams finish in the men’s 12k race.

The ladies 8k race was also slightly down on numbers compared to last year’s race of 865 women and 93 teams, with 739 women and 84 teams finishing in Saturday’s race.

Greeted by blue skies and sunshine upon arrival at Donington Park it was only the cold wind that reminded everyone that this was still the final cross country race of the winter season, and although the sunshine disappeared later on it thankfully remained dry all day.

The course consisted of a number of large laps around the park grassland and appeared dry and firm underfoot at first sight, however closer inspection revealed a very undulating terrain with a very steep downhill section and some smaller hill climbs, along with some thick strength sapping mud on the far part of the course as well as running through a turnip field at one point!

This weekend the English National Cross Country Championships were held in Donington Park on a tough, hilly and muddy 8km 2 lap course.

Six TVH ladies completed the course bringing the team overall 15th place out of 84 complete teams. This is an excellent top 20 position for the ladies despite late drop outs due to injury, it shows strength and depth and is a great end to the senior teams cross country season.

First home for the team, in her debut XC race for TVH, was Emily Shearer. Emily placed 52nd overall, a great result despite her recent trouble with a recurring injury.

Sarah Johnson was not far behind Emily in 70th. Recent trouble with her ankle has made Sarah cautious over uneven XC courses, however this didn’t seem to hold her back and she finished the season with a great run.

Victoria Carter had a good run, also her final XC race of the season she finished 109th in front of several folk she wasn’t expecting to beat.

Siana Jones, suffering with her annual cold, filled the final spot in the scoring team in 219th.

Our final two runners have attended nearly all the XC races this season and have contributed solidly to the team. Barbara Maddison, also with a cold, and Christine Munden finished the 8km course in 676th and 718th respectively.

It’s always a great sight to watch the start of the men’s National Cross Country race and Saturday’s race was no exception with over 1,700 men spread out across the starting field at Donington Park.

A good start by a trio of Valley men including Antonio Silva, Chris Smith and Mohamud Aadan established all 3 up in the top 30 early on and ensured that they weren’t caught-up in the bottle neck where the course narrowed after about the first half mile.

Antonio soon found himself up in the top 10 in one of the leading chasing groups consisting of just 3 or 4 men, and the good form which had won him a bronze medal in the South of England Cross Country Champs allowed him to maintain this position and come home in 9th place in a time of 43m 37s, it was an excellent finish to a great cross country season for Antonio.

Chris also maintained his run of good form, after a 6th place finish in the South of England Champs he once again proved his cross country pedigree to finish in 23rd place in a time of 44m09s, with yet another fine performance in the National Champs.

Various factors including illness meant that Saturday’s race was Mohamud’s first cross county championship race of the season, and although missing essential race form he gave a very good performance to finish well up the field in 42nd place in 45m 05s.

On his first outing in the National senior race James Ellis looked to be very much at home over the course and had a very strong race to finish in 148th place in 47m 39s with one of his best races of the season.

Another Valley man hitting form at the right time was Chris Thomas, who showed very good form on his National debut to come home in 183rd place in a time of 48m 28s, a good sign for things to come.

Alex Warnakulasuriya was also making his National debut and showed good improvement on earlier races this season with a good performance that placed him in 489th in 53m 22s and should only continue to improve next season.

Despite not feeling too good on the day and losing a shoe close to the finish Fahad Abdi kept going to finish as 6th and final scorer for the team in 808th place in 57m 42s, giving the team a final finishing position of 20th team out of 123 finishing teams in the race.

Saturday’s race saw Steve Norris make a welcome return to the team after recent illness and he gave a very good account over the tough course to finish in 891st place in a time of 58m 43s.

Greg Bennett also performed well having had his season interrupted by injury and a 934th place finish in 59m 15s gave him his best ever finish in the National.

Manuel Da Silva’s determination to race and support the team meant he was in for a painful race, as unfortunately a foot injury refused to stay away on the day and he was in pain as he finished in 1039th place in 1h 00m 57s.

James Malcolm was racing in his first National and seemed to take it in his stride as he had a good race to finish in 1096th in a time of 1h 01m 50s.

In comparison Richard Bell has a number of National races to his credit and while still recovering from a cold he used this experience to run a well judged race that saw him come home in 1151st in 1h 02m 34s.

Another Valley man making his debut in the National was Scott Brewer, and despite training over shorter distances he acquitted himself well over the 12k course to finish in 1162nd in 1h 02m 46s.

David Ford wasn’t troubled by the large field as he also made his National debut and gave a good performance for a 1322nd place finish in a time of 1h 05m 24s.

Simon Maddison completed the 15 man Valley team with another determined performance that saw him cross the finish line in 1712th place in 1h 27m 40s out of a total of 1730 finishers in the race.

Earlier in the day saw the start of the U20 men’s race, a 10k two and a half lap race in which Robert Vallance was the only representative for the TVH junior men’s team.

Although not feeling at his best Robert still managed to better his performance in last year’s race to finish 9 places higher on Saturday for his highest finish in the National in 81st place in a time of 42m 28s out of a total of 152 finishers in the race.

With only the Inter Counties Cross Country and Middlesex Veterans Cross Country Champs on the weekend of March 12th and 13th, that’s all for another winter season.

As the cross country season draws to a close it was great to see both the Valley men’s and ladies teams finish in the top 20 of the National Cross Country and a great finish to the season.

Well done to all those who took part and many thanks to those who supported the team, with continued support both teams can only go from strength to strength!