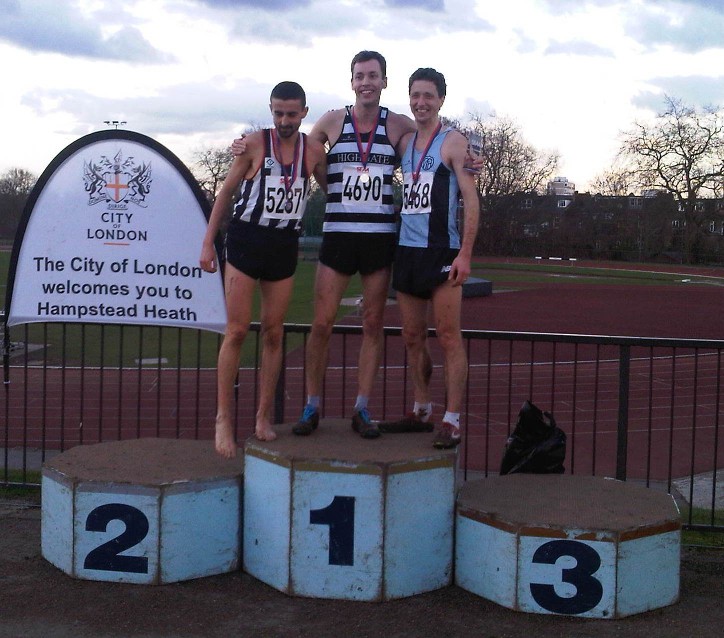 It was fine weather and a fine race for the Valley senior teams in this year’s South of England Cross Country Championships at Parliament Hill, with the ladies and men’s teams both inside the top 10 and a fantastic bronze medal for Chris Smith finishing 3rd in the men’s race.

Chris was well supported over the long 15k race distance by a 15 man TVH team which performed exceptionally well to record their highest finish in recent years, as 6th placed team out of 69 finishing teams, while the good weather increased the size of the men’s field from last year’s race to 1068 finishers this year.

Lucy Smith was first home in the ladies 8k race in 45th place to lead an 8 strong TVH team to a very good 9th place out of 63 finishing teams, with the ladies field also showing an increase in numbers from last year with 574 finishers.

In the U20 junior men’s 8k race Toby Clyde made a welcome return to the Valley team and had a great race to finish just outside the top 10 in 11th place, his best ever finish in his final year as a junior.

Making her first appearance in the U20 junior women’s 6k race and in only her 3rd ever cross country race Shania Lorenz completed the tough Parliament Hill course in 77th place.

Compared to the freezing conditions earler in the week Saturday saw the welcome return of blue skies and mild winter sunshine which raised the temperature to ensure soft but firm ground underfoot, with patches of mud present due to the previous day’s rain, but overall race conditions were very good and made for a fast race.

The senior men’s 15k race is the longest race of the season over what many would say is the hardest course of the season, consisting of 3 long laps around Parlament Hill over a number of hills and undulating grassland and woodland, it’s not a course to be taken lightly.

For the senior women and junior men’s races it was a 2 lap 8k course around Parliament Hill, while the junior women’s race was over a 6k course.

The South of England cross-country championships were held at Parliament hill this weekend. The rain stayed away and the ground, relative to previous years, was fairly firm. There were 574 ladies on the course and 63 complete teams. Eight TVH ladies completed the course and the first 4 scored to bring the team home in 9th position.

Lucy Smith was the first TVH lady to finish in 45th position. Lucy, despite suffering from a cold at this race, appears to be continually improving now she is able to train again, it will be great to see her racing at the nationals next month when she is truly back on form.

Fiona Thompson was next to finish, only a few places behind Lucy in 56th. After taking some time out due to injury, it was great to have Fiona back in the team. Stephanie Ainley finished 65th and Chloe Beckett completed the scoring team in 115th. Stephanie and Chloe are having excellent first cross-country seasons in the senior ladies TVH team, both appear to be getting stronger and faster with every race.

Lauren Morris has also improved her performance through this season, she took on the mud in her usual determined spirit this week and finished 252nd. Barbara Maddison, looking good on the hills, finished 471st, just in front of Kirstie Tew (492nd) who was looking relaxed after also having completed the Parkrun earlier in the day.

Charlie Le Rougetel, racing for the first time at Parliament Hill, finished 513th. Charlie steadily worked her way through this tough course which is longer, muddier and definitely more hilly than her usual course on the Wormwood Scrubs.

Shania Lorenz represented the under 20 TVH ladies across a tough 6km course. In her third ever cross country race she came 77th (33:42).

It’s always an inspiring sight to see over 1,000 men racing from the start line and up the first hill, and there was a Valley vest amongst the leaders again as Chris Smith made a positve start alongside the leading group of athletes.

By the end of the first lap the race leader had established a good 10 seconds lead, with Chris in a chasing group of 3 athletes that were well clear of those behind them, then after the second lap this group of 3 had broken up, with one going ahead to chase the race leader and one going behind, putting Chris in 3rd place and looking good for a medal.

On the third and final lap there was no way that Chris was going to let anyone else move into medal contention as he increased the gap over the fourth placed athlete to over 15 seconds, to come home clear in 3rd place to win a brilliant bronze medal in a time of 49m 09s.

With his previous highest finish being a 4th place in 2011, this was not only Chris’ best ever finish but also his first South of England championship medal, a brillaint performance made even more amazing by the fact that he first raced in the senior championships in 2003 – a truly great performance and many congratulations Chris! 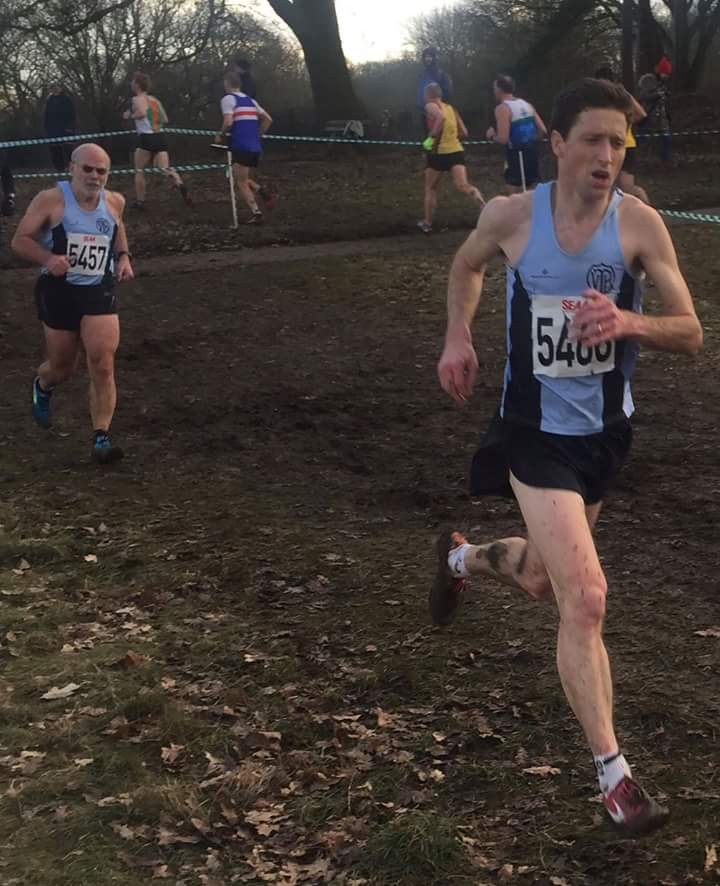 Another Valley man who would have been in medal contention if he had been fully fit was Mo Aadan, who was in his first race after recovering from a recent injury, and he ran a very smart race as he steadily worked his way through the field over the 3 laps to finish in 20th place in a time of 50m 40s, a very good position given his lack of race fitness.

Having been forced to miss out on earlier races this year through injury James Ellis couldn’t wait to get started and was in inspired form in his first race of the year, as he raced around Parliament Hill to finish in 47th place in a time of 53m 10s, his highest ever finish and an incredible 50 places higher than last year’s race, a great performance.

Travelling down from Scotland an in-form Mark Haskett was keen to race and he also improved on last year’s race with a very good finishing position of 79th in 54m 20s, to record his highest championship position and move up 13 places from last year’s race.

It was Simon Prigent’s first South of England championships race, though you wouldn’t have known it as he looked to be enjoying the experience (as much as you can enjoy Parliament Hill), and he had a strong race to finish just outside the top 100 in 103rd place in 54m 54s, a very good Southern debut.

Carrying on his run of good form Andrew Mitchell was the 6th man and final scorer for the team, having been worried about a minor injury before the race he needn’t have worried as he had his best ever Southern championship race to finish in 188th place in a time of 57m 23s, to bring the team home in an excellent 6th place out of 69 finishing teams.

Putting his marathon training to good use around Parliament Hill Calum Nicol enjoyed a good race to finish in 217th place in 57m 58s, a decent marker for the marathon as he continues to build on his training to get stronger every race.

Also making his debut in the South of England championships Daniel Garcia-Rasines raced well over the long distance around Parliament Hill and was rewarded with a finishing position of 233rd in a time of 58m 18s, another good Southern debut.

As someone familiar to racing around Parliament Hill Steve Norris would have been pleased to see so little mud on the course compared to previous years, especially so he could keep his new spikes as clean as possible, and his clean pair of heels brought him home in 547th place in a time of 1h 04m 43s.

Another Valley man on the move is Paul Woodgate, who in training for the marathon continues to break though his own pb’s, which he did again on Saturday with an excellent performance to finish in 673rd place in 1h 08m 00s, his best ever finish and 46 places and nearly a full 5 minutes ahead of last year’s race.

After a below-par start to the winter season due to illness Greg Bennett is now showing good signs of improvement every race and he paced himself well around the tough course to a finishing position of 726th in a time of 1h 09m 22s.

It was a much more enjoyable experience for James Malcolm compared to last year’s race, where he lost the spike plate from one of his shoes, and without such problems he finished in 796th place in what must have been a photo finish as he and 3 other athletes were given the rather unique time of 1h 11m 11s.

Another regular to Parliament Hill Richard Bell knows the course well and would have enjoyed the good conditions underfoot, and he once again conquered the hills to come home in 844th place in a time of 1h 12m 36s.

Making his first appearance in the South of England championships David Ford did well over the longer 15k distance, having only recently come back from a short break due to injury he showed good strength and endurance to finish in 957th place in 1h 16m 28s.

Flying the flag as final man home for the Valley was Simon Maddison, who was raring to go given the good conditions underfoot and his good knowledge of the course which brought him home in 1053rd place in a time of 1h 27m 19s, his best performance in recent years.

Earlier in the day Toby Clyde made a welcome return to the team to represent TVH in the U20 junior men’s race, now in his final year as a junior he made the most of the shorter 8k race distance and good conditions underfoot to record his best ever finish in a Southern championships in 11th place in a time of 27m 48s, an excellent performance that bodes well for his move up to the senior team next year.

It was an excellent all round performance for the Valley men, with a bronze medal for Chris and 6th place for the senior team, as well as 11th place for Toby in the junior men’s race, it certainly provides a good foundation for future success.

The end of the cross country season is fast approaching with just 2 races remaining, the final Met League race at Alexandra Palace on Saturday February 11th, and the English National Cross Country Championships at Nottingham on Saturday February 25th, so make the most of the opportunity to come out and race!