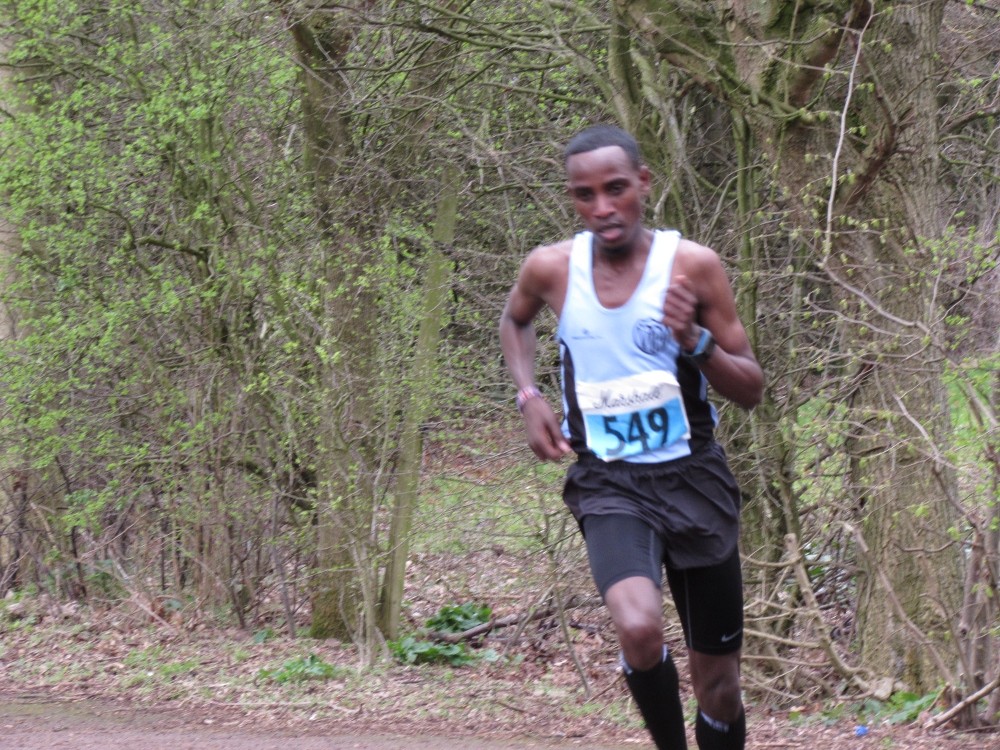 The Valley men’s team welcomed 4 runners making their debut in the 12 Stage Road Relay and some good performances on the day earned the team a 23rd place finish out of a total of 39 finishing teams.

This result means that the men’s team now qualify to go through to the National Road Relay in Birmingham on Saturday April 11th.

There was also a competition between the Valley men during the race to find the fastest leg in the club’s own handicap competition, and congratulations go to Valley junior Robert Vallance who wins the Southern Road Relay trophy.

The weather later reflected the feelings of the Valley men and women when news was heard of a car accident involving 3 cars having occurred at the entrance to the race car park, with 1 of the cars carrying 4 Valley members, 2 from the men’s and 2 from the women’s team.

Thankfully none of those involved were seriously injured, but all suffered severe bruising and minor injuries, though I’m pleased to report that all should make a full recovery – our best wishes go to all of them to get well soon.

The men’s race started in dry but windy conditions and the course itself was over slightly undulating public cycle paths and footpaths, starting and finishing on the athletics track and going out around Stantonbury campus and Linford wood (a favourable name for the Valley but no connection!).

The format of the race remained unchanged from previous years, with 12 alternate long and short legs of a little under 8 km and just over 5km for the men and 6 x 5km legs for the women, with the extra distance on each long leg made up by a 2nd lap around Linford wood.

As the men’s race started at midday it was Mark Haskett who got the team underway on first leg, a long leg of a little under 8k.

With a number of fast runners starting the race it’s always a very competitive leg and Mark did well on his first race back after a long injury to come home in a time of 27m 04s, which put the Valley men in 28th place out of 50 starting teams.

Manuel Da Silva took over on leg 2, a short leg of just over 5k, and using his good knowledge of the course paced himself well to come back in 30th place in a time of 17m 57s.

On leg 3, Chris Smith once again showed his good form to close the gap on the teams ahead with a quick time of 25m 04s and gained 8 places to move the team up to 22nd place.

Up on leg 4 Simon Baptist fought the wind as well as the opposition to keep the Valley men in touch in 24th place in a time of 18m 55s.

Following on leg 5 gave Mohamud Aadan a good opportunity to chase down those teams ahead and he didn’t waste any time in overtaking 5 teams to move up to 19th place in the fastest long leg time for the Valley on the day, a very swift 24m 33s.

As the weather continued to deteriorate and the wind and rain became even stronger, it was the turn of 2 Valley junior men to make their mark on the race.

Robert Vallance didn’t disappoint on leg 6, producing the fastest short leg of the day for the Valley, and his time of 16m 51s gained another place to put the Valley in 18th place at the halfway mark in the race.

Next to go on leg 7 and making his 12 Stage Relay debut was Toby Clyde, and despite the torrential rain and wind he recorded a very good time of 25m 34s to move the team up to 17th place.

It was the first race back after injury for leg 8 runner Paul Heaphy and he found himself starting just ahead of a familiar face and enjoyed a good tussle throughout his leg to maintain 17th position in a good performance and time of 17m 59s.

Leg 9 saw Steve Norris go briefly off-course after a course marker had been blown away, yet despite this he still produced a decent time of 28m 37s and kept the team up in 17th place.

After suffering a recent foot injury Andrew Mitchell on leg 10 showed he hadn’t lost too much of his good form from the winter with a short leg time of 18m 02s to come home in 18th place.

Ewan Ross was up for the final long leg to make his road relay debut on leg 11 and coped well in the conditions with a good performance that kept the team in 18th place in a time of 28m 43s.

It was then down to Phil Wetton, who stepped in for the final short leg of the race and unfortunately his best effort wasn’t good enough on the day, as his time of 20m 56s moved the team down 5 places to finish in 23rd place out of 39 finishing teams.

There was also a 2 man Valley B team racing on Sunday, with both Jason Sewards and Scott Brewer making their 12 Stage Road Relay debut.

Jason has been an ever-present member of the team throughout the winter and he extended his 100% turnout record with a hard fought 1st leg to record a time of 35m 00s for his long leg, while Scott continued his improvement over the winter with a short leg time of 21m 45s.

With the Valley men’s A team finishing inside the top 25 this result also ensured qualification for the National 12 Stage Road Relay in Birmingham.

Well done to everyone who competed and supported the team at Milton Keynes in very difficult conditions and here’s looking forward to the National Relay on April 11.

One last order of business to be concluded for the Valley men’s team is to determine the winner of the men’s road relay handicap trophy for the fastest overall runner on the day after taking into account their handicap time allowance.

To decide the winner of the men’s Southern Road Relay trophy the athlete who beats their predicted time by the biggest margin wins the trophy – Robert was 9s faster than his predicted time and Toby was 6s faster.

So congratulations to Robert, who wins the trophy for the first time!