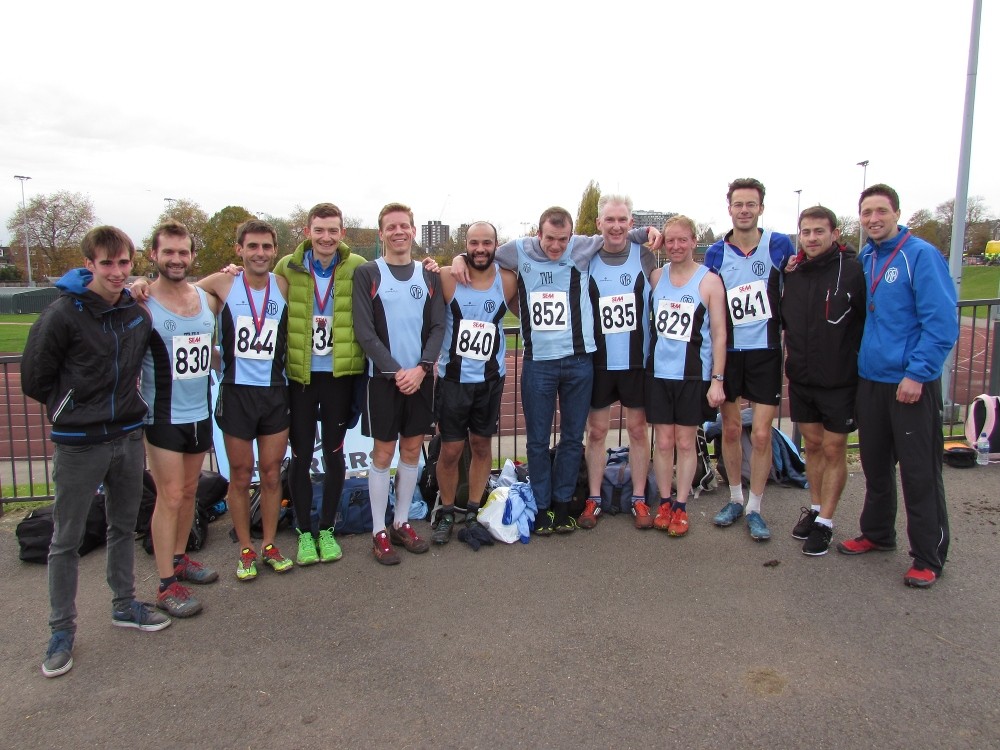 With a total of 12 men racing the Valley men finished 3 teams in an ever increasing field which this year grew to 29 teams and 415 completing the men’s race.

The ladies race also increased in size to 21 teams and a field of 250, which included 2 Valley ladies but no complete team as unfortunate circumstances had prevented a number of ladies from racing on the day.

A week of relatively dry weather and blue skies on race day meant that the usually muddy fields around Parliament Hill were dry and solid underfoot, providing fast going over the hilly course, with only a light cold wind as a reminder of autumn in the air.

With some of the lower fields fenced-off on the far part of the course it meant one change to the long lap from previous years, as the lower field was replaced with a lengthy switchback along the top of the field.

This Saturday was the London Cross-Country championships held at Parliament Hill. It was a bright day with relatively firm ground and generally good conditions for this tough course. The TVH ladies team suffered in numbers on account of injuries and family commitments. However, despite not having a full team, two cross-country loving ladies represented the club in this competition.

There were 250 competitors in the women’s race. Lauren Morris, smashing her pb on the course by over 2 minutes, finished 114th in 27:34. Kirstie Tew, after completing the Park Run in the morning, set her Parliament Hill pb as 31:54 finishing 205th. There were also some solid performances from our second claim athletes who regularly train with us on Tuesdays but who were competing for their 1st claim clubs. Well done to Claire McMahon-Adie of Luton AC, 22nd in 23:51, Issy Rea, 30th in 24:12 and Anna Critchlow, 38th in 24:28, both of West 4, who all came in the top 40.

We are looking forward to a strong TVH turn out from the ladies at the home Met League fixture on the 3rd of December.

Parliament Hill has always been a favourite course for Chris Smith and for good reason, as he has never finished outside of the top 3 in this race in recent years and has been crowned London champion an impressive 4 times.

Having won last year’s race he made a determined start in defence of his title by going straight to the front of the field alongside 2 or 3 other athletes, and after the first 2 short laps the race leaders were down to a group of 3.

By the end of the 3rd lap Chris was clear in 2nd place with just a small gap to the leader and this remained the case until the end of the 4th and final lap, as another fine performance from Chris saw him come home in 2nd place in a quick time of 31m04s to win yet another London medal, this time silver, and just 14s away from gold.

A fast start from James Ellis put him inside the top 10 after the first short lap and showed signs that he is close to returning to top form after his September marathon, and an improvement of over 1m30s on last year’s race saw him finish in 22nd place in a time of 33m35s.

Simon Prigent was making his debut over the tough Parliament Hill course, but as a strong hill runner he was never in any trouble and made good progress throughout the race to finish inside the top 30 in 29th place in 34m13s.

The 4th and final scorer for the Valley medal winning team was Manuel Caeiro, who had raced previously over Parliament Hill but not in a Valley vest, and he made sure it was a memorable performance as he finished in 37th place in 34m51s to bring the team home in 3rd place to claim bronze team medals.

Just 9s and 3 places separated Manuel from Andrew Mitchell, who had kept Manuel and a possible medal in his sights all race, and despite just missing out on a medal Andrew should be pleased that his 40th place in 35m00s was a great improvement on last year’s race as he finished 30 places higher and over 3m30s faster.

Next to finish in 245th place in a time of 41m04s was Joe Cooper, it was a step up in race distance for the only U20 junior athlete on the team and a good performance given the longer distance.

In his best ever race over the Parliament Hill course Paul Woodgate was in good form as he improved on last year’s race time by over 3 minutes, to be 7th man home and finish in 265th place in a time of 41m54s.

Chasing Paul home and just 5s and 4 places back was James Malcolm, who enjoyed a much better race than last time around Parliament Hill in January when he only finished with one good shoe and his time of 41m59s brought him home in 269th place.

Richard Bell is no stranger to the hills and he posted a good time of 42m18s in 282nd place, over 2 minutes faster than last year’s race.

Still missing some race fitness Christian Nielsen worked hard on the hills and continued to give his all until the finish in 304th place in 43m18s.

Only 7s and 2 places after Christian was Greg Bennett, who is still recovering from the effects of a long-standing cold and his 306th place in 43m25s reflected this.

Completing another race in a very busy season so far and also completing the team on the day was David Ford, who enjoyed a good debut around Parliament Hill to finish in 358th place in a time of 46m06s.

It was great to see such good medal winning performances and congratulations to all the team, and many thanks to everyone supporting the team on the day.

After 6 weeks of back-to-back racing there is now a brief gap in the busy race schedule, so make the most of the time to put in some good training ahead of the 3rd Met League race.

Don’t forget that it’s a home race at the Scrubs on Saturday December 3rd and we will want to see everyone racing.