Saturday dawned crisp and frosty with a clear, clear blue sky, no wind and great prospects for a day which were amply fulfilled. 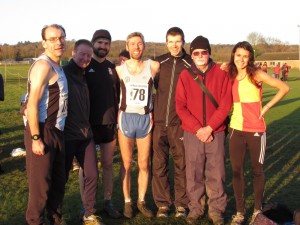 The course at Horspath, hosted by Oxford AC, and new for most if not all Valley runners, proved to be a beautiful course which everyone seemed to like, with an excellent cross section of conditions providing the full gamut of what a cross country course should be.

Starting on the playing fields the going was firm and flat with frost still in the shadows. The path then looped back round field edges and paths, the going a little more uneven with the odd puddle and muddy bit to make it interesting. On the second, long lap, the path headed straight for the hill, the only slightly negative part of the course being a short stretch of paved path, but still with the verge to run along. The path then turned uphill through lovely autumnal woods, sprinkled with russet coloured leaves, turning briefly onto a sunlit and still frosty meadow, before another steady climb through the woods, turning back down onto a fast rutted but firm descent. There was then a further short climb looping round the meadow before heading back across the fields towards the start. Ah! But at this point we had been lulled into a false sense of security, as the final stretch along the back of the playing fields revealed the true Oxfordshire in all its glory – grey and sticky MUD – which successfully sucked off the shoes for a number of competitors.

The first race at 11:00 for the 50 and 60+ men saw the entire 50+ team drop out and only V65 Simon Maddison plugging away at the back of the field. Even here though the competition was tough, and he exchanged places throughout the race, but slipped back on the final climb and was unable to claw his way back through the muddy stretch.

The second race was for the ladies, doing one short and one long lap, and saw the very welcome return of runners of great success in the past, Diana Kennedy and Kate Nunn who now wears a British Triathlon Vest. Well done Kate!  Ace Victoria Carter made up the scoring team. Competition was tough this year though and Victoria was not quite able to repeat her Bronze of last year, finishing 4th in the 40-45 category, with Kate finishing 10th. Diana was 17th in the 45-49 group, and the team overall finished 6th in a very competitive 40-49 group.  Barbara Maddison ran a steady race to finish 18th in the 50-54 group, having paced Christine Munden who slipped back in the last half lap to finish 21st in the V40-44.

The final race was for the 40-49 men, with Steve Norris turning in a fine performance to finish 16th in the v45 category, followed by Greg Bennett who ran a very solid race to finish 31st V40, and third scorer stalwart Richard Bell 30th in the V45. The team was rounded out by Jason Sewards, who is also now a regular stalwart of the team at 40 in the V45.

The men’s V40-49 team finished 12th overall in what was again a very competitive field.

Many thanks to Barrie Saunders and Phil Wetton for their unfailing support!