With a number of people unavailable it was the smallest TVH team of the season that travelled to Southampton on Saturday for the final Southern League match of the season.

The team worked hard to cover nearly all of the events to finish 4th team on the day, which after a number of good performances this season puts TVH in 7th place on 13 points in SAL Division 1 after 5 matches, which equals the final finishing position in Division 1 from last year.

The 15 Valley men were kept very busy throughout the day, each competing in a number of events to ensure that all events were covered except for a single B string, reflecting the great strength of the Valley team spirit.

Busiest Valley man on the day was TVH Man of the Match winner Ben Morgan, who competed in an incredible 7 events, including 110mh, 400mh, shot, discus, triple jump, pole vault and 4x400m relay.

Despite the strong headwind in the home straight there was also a pb for Tamas Joo who finished in 3rd place in the non-scoring 200m in a time of 25.0s.

Competing in 5 events Florian Vogel also managed to throw a pb of 24.62m for 3rd place in the A string hammer.

On his TVH debut Henry Hart enjoyed an excellent start in a Valley vest to win the B string 5000m and maximum points for the team and also recorded a pb time of 16m04.9s. 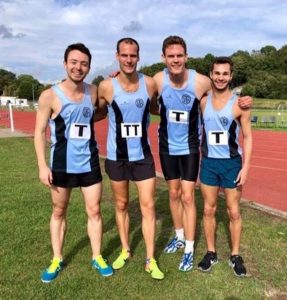 Our the women’s side we had a small but very enthusiastic team of 10 women. They  completed in all but 1 of the 19 events during the day so very much stepped up to the occasion and demonstrated the team spirit Valley woman are made of.

Nanci was our sole thrower and Jasmin the only sprinter with the others partaking in their events and filling in the gaps.

The day saw SAL debuts in the long jump for Chloe and Georgia; as well as Lara in the javelin and high jump; and Rosie and Chloe in the hurdles.

We had great performances in the steeplechase by Chloe and Rosie finishing 2nd and 1st in A and B.  Angela also performed well and gained maximum points  in the triple jump.  Needless to say by the end of the day the girls were exhausted but still managed to muster respectable relay finishes. 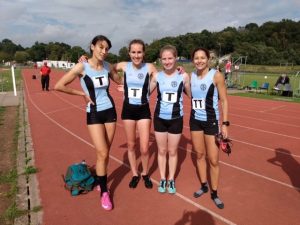 With so many fantastic  performances from athletes competing in 3-6 events it was tough to award woman of the match but it went to Lara Scerri for her 6 performances throughout the day.

Well done to all athletes, volunteers and coaches that have supported the SAL team throughout the season! Very much a team effort and one we should all be proud of.