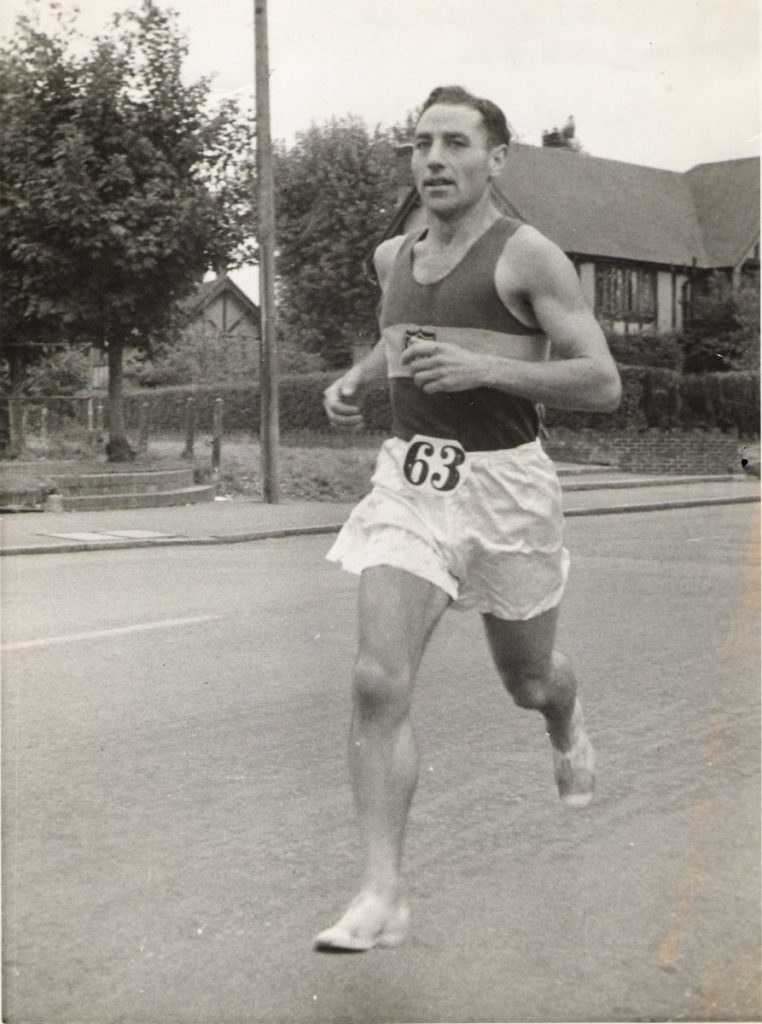 Thames Valley Harriers club legend Ron Hopcroft has died at the age of 98.

Ron served the club as a formidable athlete, club president and hard working official and is best known for his ultra-distance road running exploits in the 1950s. During his most successful years as an athlete he still represented TVH on every possible occasion, encouraging his contemporaries to do likewise.

Ron was born in Chiswick in 1918 and was active in many sports at school before joining Ashcombe AC at the age of 17, winning his first race in Regents Park and competing in cross country and track races before being called up to the forces in 1939. He returned  to  London in 1941 dealing with bomb damage from air raids and finding that Ashcombe AC had disbanded, he joined Thames Valley Harriers.  Ron briefly returned to track running after the war but in 1949 at the age of 31 he decided to try long-distance road running to get fit for the cross country season,  joining the road running team and a large training group based at Boston Manor in West London.

Gradually increasing his training from running three days a week to running 100 miles weekly, Ron ran good marathon times in the early 1950s and in 1954 started running ultra-distance races. Ron was willing to experiment in training, running seven days a week and then twice a day when it was almost unheard of. The “Brighton” race (approx 55 miles from Big Ben to the Brighton Aquarium) was one of the big ultra races, where Ron raced against his arch rivals, Tom Richards and Bill Kelly.  Ron finished 3rd in 1955 behind Tom and Bill, but returned in 1956 to win by 8 minutes in 5:36:25.  He continued to race over the marathon distance, winning the Polytechnic marathon team competition with TVH colleagues Jackie Haslam, Phil Vivian, Harry Dennis and Reg Minchington.

Ron then turned his attention to the 100 mile record, targeting the world best time of 12:20:28, deciding to do it the hard way by running from Hyde Park Corner to Box in Wiltshire, a very hilly course in the final 30 miles.  At 5am on  25th October 1958, Ron set off from Hyde Park Corner;  through 30 miles at Reading in under 3½ hours before the hills started,  Newbury at 56 miles before it became crowded with racegoers, cup of tomato soup and piece of bread on the move at 60 miles, on to Marlborough at 75 miles, in trouble at 80 miles walking for a few yards, more soup and back to sub 7 minute miling, through Chippenham at 90 miles, struggled through worst of the hills, eventually Box came in to sight in the dusk, finishing in a new record of 12:18:16.  In Ron’s own words,  “What a reception there was! Almost the whole village had turned out (population of Box -2,100) The village of Box had never seen our club crest ‘vTh’ before, but we very soon let them know it stood for ‘Very Tired Hopcroft’.”

Ron competed for the club for 20 years but was forced to retire from running in 1961 after an ankle injury and the pressure of business and family commitments. He took up the new role of club Road Running Secretary, building up a strong and thriving section and a fine team spirit.   Ron served two terms as the Club President in 1970-1973 and 1986-1988, the second term taking in the club’s centenary year.

I had the pleasure of getting to know Ron during his later years at the club, once being loudly admonished for not wearing my club vest for a road race! Ron continued working as a track judge and cross country official until 2007 and showed a keen interest in how I was coping during my stint as club Chairman in 2010-2013.  Ron attended our 125th anniversary celebration in 2012, where the report on his 100 mile record posted in the clubhouse attracted great interest amongst our younger members.