TVH were invited to compete at a pilot meeting to test a 4 club format under the current competition guidance and to give athletes an opportunity to compete before the British Championships.  Manuel da Silva and Phil Wetton got the team together (all having to travel separately) to compete against Birchfield, Coventry and a composite team of athletes who have been training at Nuneaton.

In the unusual circumstances of a test event it ended up as a close team contest with TVH and the Nuneaton Nomads team finishing level, 2 points ahead of Birchfield.  TVH winners on the day were Angela Barrett with 12.82m in the triple jump,  Josh Carr (3:54.40) and Katie Olding (4:37.31) in the 1500m.  In a busy weekend Josh also finished 3rd in the 800m in 1:53.94 and competed in an invitation event in Bromley on the Friday, running 3:50.20. In  the first weekend that relay races were reinstated to competitions, the 4 x 100m event ended up as a race between the TVH men and women.   Keano-Elliott Paris-Samuel was the fastest TVH athlete in the sprints with 10.79 secs for the 100m and 21.45 secs for 200m in windy conditions.

Other good performances included Maddie Casey in the 800m with a new PB of 2:20.90 after older sister Amelia pulled up with a foot injury in her race, Nilrem Stewart ran an impressive 400m race in the windy conditions with a new PB of 48.80 secs and Samuel Clark ran a PB of 54.13 secs in the 400m Hurdles. Jess Tappin finished 2nd in the 400m Hurdles in 58.35 secs and ran 25.58 secs in the 200m, Emma Howe set a new club U20 record in the javelin with 43.37m, Laurensa Britane returned to competition in the javelin and discus after a long injury lay-off and little opportunity to train for the throws, Hannah Hall competed in the 100m and 200m and Pippa Wingate and Fergus Imrie in the hammer and shot. Gavin Johnson Assoon was 2nd in the javelin 50 weeks after his last competition.

Also competing at the open meeting at Bromley on Sat 22nd August was first year U15  Maya Sutaria with an impressive 45.05 secs in her first ever 300m race.    Maya pictured below, a suitable distance in front of Dina Asher Smith. 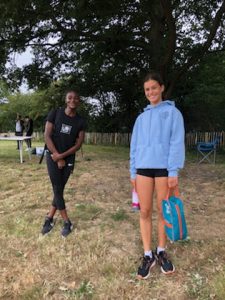