It was grey, windy and intermittently raining for the second Met League race at Stevenage. Fortunately for the ladies, it remained dry for their two full laps of this course, made up pretty much equally of undulating meadow and a winding leafy path through the woods. The plentiful leaf fall made for softer running, but also harder to spot the frequent stone and tree root trip hazards, although to their credit the organisers had gone to some lengths to mark these with white spray paint, and ultimately it was only Simon Maddison who came a cropper sticking his toe under an inconsiderate root. 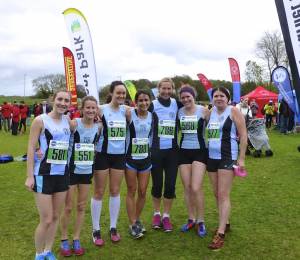 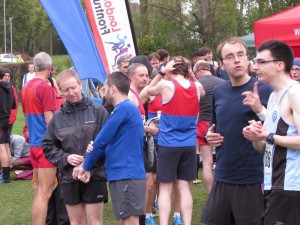 In a large field, swollen by Cambridge University, Tracy Barlow, now fully recovered from her record breaking Marathon in Berlin, set off fast with the leading bunch and pretty much maintained her position throughout the race to finish 14th, closely followed by Lisa da Silva making a very welcome return, and in cracking form at 19th just under 30 seconds later. Joanna Mobed also running strongly came in at 50th, with Siana Jones 4 places behind. Maire Gorman followed at 81, with Lauren Morris at 95 and Hannah Cork 4 places and 9 seconds later in her debut race for TVH. Jess Bass then came in at 108 with Lizzy Sisley running hard just over a minute later at 129. Barbara Maddison on her first running race ever finished at 181, with Euphemia Scott at 185, beating Christine Munden who had a very difficult race at 186. Overall the team finished in a creditable 5th position, pulling up their overall placing to 6th in Division 1.

Immediately following the ladies race, there was a pit handover of young da Silva from Manuel to Lisa, the speed and slickness of which would have been the pride of the Mercedes F1 team, just in time for Manuel to make the senior men’s race. Junior then continued to provide as much vocal support for his Dad as earlier for his Mum.

Right on cue, it started drizzling for the Senior Men’s start, although thankfully it eased off again by the time the field were in the woods. In a very large field Sean Renfer, making a very welcome return to the team, had to work hard, and just missed out of the first hundred finishing at 101, with Dad da Silva improving on his placing at Claybury at 138, and Christian Nielsen running strongly 23 seconds and 20 places later. Peter Sarkies followed in at 174, Simon Baptist at 202, and Greg Bennett at 239.  Mike Wilson came in at 265, Peter Hill at 303 with Richard Hooley snapping at his heels just 3 seconds and 3 places later, showing how close packed the field continued to be. Richard Bell finished at 330, with Adrian Thompson at 347 and Scott Brewer at 366. John Husbands worked steadily around to 385, making a steady comeback after a long period of injury, only to be pipped at the post by Jason Sewards at 384, and Simon Maddison brought up the rear at 442.

The men’s team finished 8th overall in Division 2, maintaining its overall position of 6th in the league, the absence of our best endurance runners through marathons and other commitments continuing to show. The result for the veteran men in Division 2 was a disappointing 9th, meaning a drop down to 10th overall. However with only 10 points separating the bottom three teams, there is everything to run for in the upcoming races!

It was a long slog home through the London traffic for those who came by car, during which time the heavens opened, thankfully having held off during the afternoon’s race.

The next race is a pre-Christmas warmer on Saturday 20th December at Hillingdon House Farm. This is easily reached by tube, which is the recommended way of getting there. Let’s please get a strong turnout for senior and veteran men!!