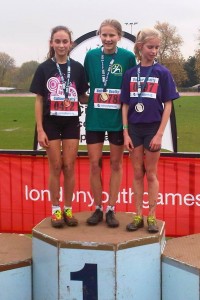 Charlotte Buckley celebrates a fantastic podium finish after winning the U13 Girls’ race.

The London Youth Games cross country championships attracts runners from all the London Boroughs to compete at Parliament Hill. With Thames Valley Harriers having runners representing several Boroughs, the club had a very successful set of results.

In the under 13 girls race Charlotte Buckley had a tough race with two other girls before coming home first for the borough of Hounslow. She usually starts slower and then moves away at the front. Ava White finished in 24th place representing Richmond. This time she didn’t get away and had to use a lot of effort to eventually win by nine seconds. Freja Schaap came home 52nd for Hammersmith out of the 192 finishers. Representing Hounslow in the U13 Girls race was Charlotte Cooney-Quinn, who finished 149th.

In the new under 11 event, Zakia Mossi for Ealing and Alice Pernthaller for Westminster were 34th and 35th. Perhaps Hammersmith will send a team next year. Our lone under 17, Eve Goodhart should be pleased with her performance when she finished 11th.

Our strongest contingent were the under 15 girls. The Hammersmith and Fulham team achieved second place even without India Weir who had twisted her ankle and was unable to take part. Led home by Verity Walker, she had a strong run to finish in 13th place, Kosana Weir and Alice Harray came in close together in 16th and 17th places. Olivia Olsher, Iona Pernthaller and Rose Barkle helped Kensington and Chelsea to a good sixth place result

Lucillo Burrell showed that he is in great shape by coming second in the under 15 boys race. This was after being the leading under 15 in the Metropolitan League race the previous week. Although he thinks he could have done better than 17th in the under 17 race, Karim Mahiddine had the satisfaction of beating last year’s Middlesex champion, Terry Fawden of Highgate by 13 seconds. Abraham Mendes Da Costa also should be pleased with his 26th place. Not having such a good day, Cassius Rathbone slipped back to 63rd.