As the Scrubs once again played host to Saturday’s South of England Cross Country Relay championships the good autumn weather and home course advantage made sure of a good turnout for both the Valley men and women, with 3 teams in the women’s race and 4 teams in the men’s race. 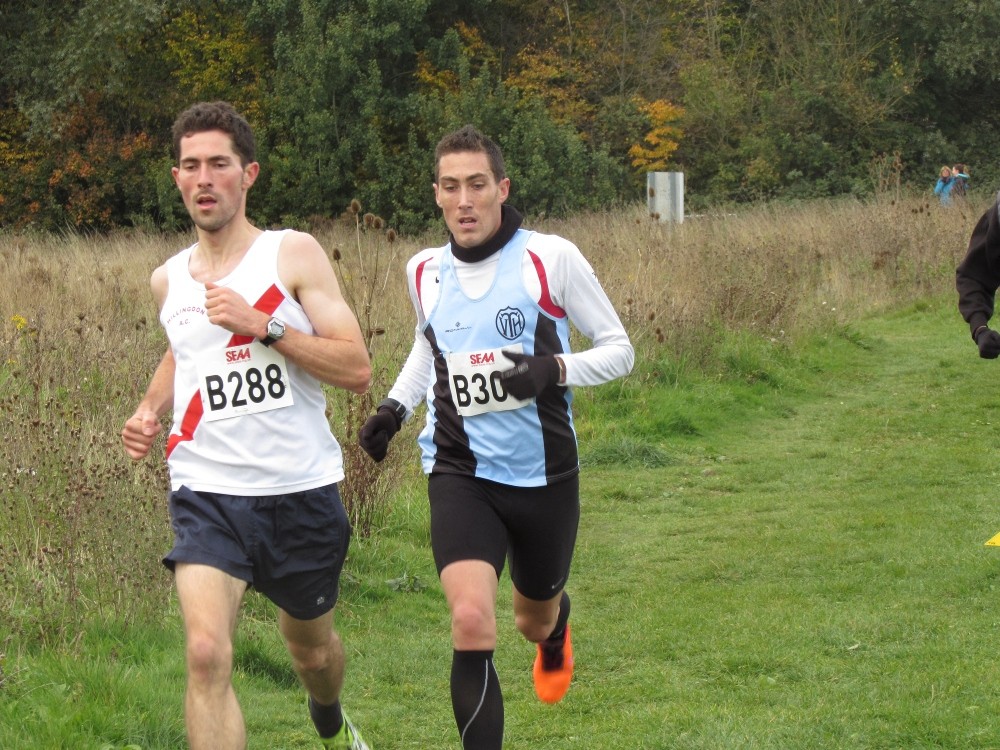 Although missing a number of team regulars the TVH ladies came out to race in good numbers with the A team finishing in 13th place, B team in 17th and C team in 22nd place out of 22 finishing teams.

The TVH men were also out in good numbers with the A team very well placed to finish 5th, less than a minute away from the 3rd placed team, B team in 18th, C team in 20th and D team in 22nd place out of 31 finishing teams.

With hardly any rain the previous week and overcast but dry conditions on race day, a moderate headwind at certain parts of the course was the only thing to slow down the runners, as the dry and flat nature of the Scrubs grassland provided fast conditions underfoot.

It had been an early start to the day’s relay races with the first junior race at 11am and it wasn’t until 2pm when the senior women’s race was ready to start.

TVH’s ladies strength in depth continues to shine at championship races, despite having many top athletes missing due to injuries and other commitments, TVH still managed to complete three teams.

The A and B teams were closely matched on leg one and Kate Green was looking very strong for the first half whilst running with the leading group but tired a little towards the end.

This allowed Jess Bass, who was having a great run to catch, encourage and overtake, and bring the TVH B team home in 19th place in 14:28, one position and 11 seconds ahead of the TVH A team.

Andrea showed that she is in great form for her upcoming marathon by staying ahead of Diana all the way until the last 50 meters when GB Masters Steeplechase International Diana showed her track speed to sprint past Andrea for a good time of 14:45.

Andrea’s final leg time was 14:59, a whole one minute and 1 one second faster than her previous best!

With Victoria Carter and Lauren Morris starting together on leg 3, they sensibly ran their own races, despite having to contend with the men’s first leg runners who were trying to run them down.

Victoria had a very encouraging run to complete the A team in the fastest TVH time of the day in 12:53 and in doing so moved the team up from 19th to13th.

Lauren also had an equally strong run to move her team up from 20th to 17th with the B team beating some good A teams including Windsor Slough Eton and Hounslow who were down in 18th.

TVH were the only club in the South of England who managed to complete a C team.

With the team spirits high, the TVH ladies will be looking forward to the remainder of the cross country season where hopefully they will get a chance to get muddy.

The TVH ladies will also be back in action in October 2016 to bring the South of England Cross Country title back home!

Starting at 2.30pm the senior men’s race began while the senior women’s race was still underway, though thankfully this lead to no confusion for either athletes or race officials!

With an excellent turnout of 16 men the Valley men were one of only two clubs on the day to field 4 teams in the race, including one runner, James Ellis, making his TVH debut and another 3, Antonio Silva, Botond Safar and Caspar Donnison, making their cross country debuts for the Valley.

First off on 1st leg for the A team was Andrew Mitchell, who despite having substituted walking for running during the previous week recorded a good time of 14m54s, the 2nd fastest Valley time of the day, to bring the team home in 12th place after the 1st leg.

Making his TVH cross country debut on 2nd leg was Antonio Silva, and he certainly made a big impression as he flew around the course, chasing down those ahead of him to finish in 2nd place and just 5 seconds off the leader by the end of his leg and the halfway point of the race.

It was no surprise to find that Antonio’s outstanding time of 13m26s was also the fastest time of the whole race by 10 seconds, a fantastic start to the cross country season by Antonio.

Leg 3 saw James Ellis make his debut in TVH colours and he didn’t disappoint with a well judged race to produce a time of 14m56s, an almost identical time to Andrew’s 1st leg time to keep the team in 3rd place going into the final leg.

Kieron Sexton stepped up for the challenge of 4th and final leg and in a close fought battle between the 3rd, 4th and 5th placed teams he produced his best time over this course of 15m31s to bring the Valley A team home in a very good 5th place out of a total of 31 finishing teams.

It proved to be a very close race between the Valley men’s B and C teams, with just 29 seconds separating both teams at the end of the race.

The 1st leg was set-up to be a battle between youth and experience, as Valley veteran and consistent relay regular Steve Norris lead off for the B team, while Botond Safar was making his cross country debut for the C team.

In another very evenly matched 2nd leg Calum Nicol for the B team and Greg Bennett for the C team were divided by only 10 seconds, with Calum’s time of 16m22s giving the B team the upper hand against Greg’s 16m32s to move them up to 17th place, just 1 place and 3 seconds ahead of the C team at halfway.

Leg 3 saw another cross country debut for Caspar Donnison on the C team, and Caspar produced a very impressive time of 16m29s given that he normally races over 400m hurdles, while Christian Nielsen put in the fastest leg for the B team with a time of 16m09s, which maintained the B team’s advantage in 17th place over the C team in 18th.

On the 4th and final leg it was Manuel Da Silva for the B team against Paul Woodgate for the C team and after a great struggle between the two of them it was only a sprint finish which brought Manuel home in 17m30s, just 6 seconds faster than Paul’s time of 17m36s.

This gave the B team a final finishing position of 18th, with the C team chasing and crossing the line 29 seconds later in 20th place.

Starting off for the D team on 1st leg was Peter Keane, who having not raced much over the summer was a little race rusty and his time of 18m27s placed the team in 29th after the 1st leg.

On leg 2 Scott Brewer ran a much faster lap than his debut in last year’s race and his much improved time of 17m41s moved the team up to 28th place.

Richard Bell had a steady race on leg 3 with a time of 18m05s to keep the team in 28th place with just the final leg to go.

Then on the 4th and final leg came the surprise package of the day, Paul Heaphy, who after coming back from injury and in his first race since last winter produced the 5th fastest Valley time of the race, 16m05s, to move the D team up 3 places to finish in 25th place, a great way to finish the race for all the Valley men.

With 4 complete men’s teams and 3 complete women’s teams it was a great sight to see so many Valley vests out racing on the Scrubs, along with a good number of home supporters to cheer them on.

Well done to all those competing in Valley colours and many thanks to all the Valley officials and helpers without whom we could not have hosted the relays so well.

The final relay championships of the year, the English National Cross Country Relays, sees a trip north to Mansfield on Saturday October 31st.

Good luck to all the Valley teams travelling to Mansfield and have a successful day’s racing.