TVH young athletes headed over to Hillingdon for match 2 of the Youth Development League on the 18th May 2019. Last year the team performed fantastically and we were promoted to a higher division which means this season has definitely required a step up! So far our athletes have not disappointed with 2 club records falling at the second match.

Our 4 x 100m U15 team including Tajaih, Joel, Clayton and Reece stormed to a win in a time of 45.5. Check out their performance below!

In addition to this Luca’s (Flethcher)  10.08 in the shot putt was another incredible new record for the club.

The boys were not the only one achieving personal bests, overall we’ve had a whopping 39 PB’s across the first 2 matches!  Full results from Hillingdon should be up on the Power of 10 very soon.

With so many PB’s, picking the athletes of the match was a tough task, however a few athletes did stand out.

Male athlete of the match: Luca Fletcher with his PB in the shot

Female athlete of the match: Clara Brooke competed strongly over 3 events with a win in the high jump.

Male athlete of the match: Noor Eldin Mahmoud for his win in the high jump and PB performance in the long jump

Female athlete of the match: Tessa Glazebrook for her win in the 75m hurdles 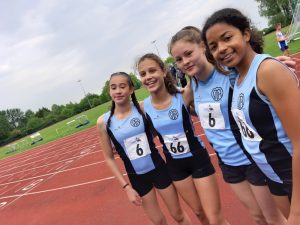 It’s been a steady start for us in the new division, and we currently lie in 7th out of 8 teams. Current team standings can be seen HERE.

We are really determined to stay in the league so will need to finish the season within the top 6 teams to do so. This is definitely within reach, and we hope to get a good team out for the next match 22nd June  in Biggleswade. See you there!