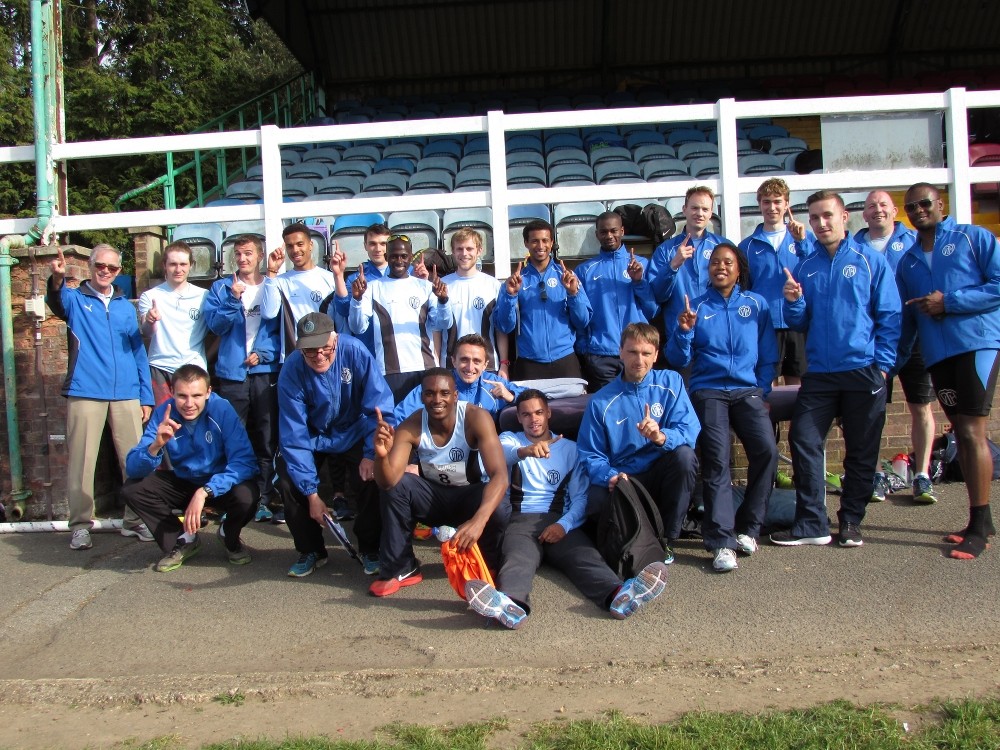 The result was unusual in that every team finished in the same position as in the first match with the Valley team again second to Harrow, this time by only 13 points and we are looking on schedule for promotion back to Division 1.

There were a number of encouraging performances along with some disappointing results. On the track there was a welcome return to the team for Chris McAlister who won the 400m Hurdles in a fine 53.20 seconds for which he won the Track Man of the Match award. Chris then returned to clock a 49.0 400m relay split to help the team to a close second place in the 4x400m in 3:15.73, which is the fastest time in years.

Antonio Silva also won his event, the 5000m, in 14:35.10. This was all the more creditable because of the positive way that he attacked the field mid-race and simply ran away. The time was all the more impressive as the weather conditions were very windy.

There were also 2 winners in the field events with Stephen Edwards battling with an Achilles problem that he had aggravated whilst doing the Long Jump but he came back to jump 13.87m to win the Triple Jump and earn the Field Man of the Match award. The other field event winner was Greg Conlon in the Pole Vault who showed that his win in the first match was not a one-off as he again reached 4.40m to stamp his authority on the field.

The Club Man of the Match award was won by Paskar Owah for his 800m/1500m double in which he battled throughout to claim 2nd place in both events. He showed that he can still mix it with the younger athletes and is proving to be a fearsome competitor.

With Edmund Amaning, Victor Dos Santos, Leroy Cain, Nigel Thomas, and James Olasunkanmi all missing the sprints saw some new faces on the team. Kerry Mathurin is proving that his switch from Long Jump to sprints is beginning to pay dividends as he clocked 11.02 for 6th in the 100m A race with Kaylen Stuart (still under 20) clocking 11.37 in the B race; both equalled their season’s best times.

With Luke Lennon-Ford stepping down to 200m Omar Hutchinson made his individual debut in the 400m having run a leg of the 4x400m in the first match and fought hard to claim 4th place in the A race in 50.74. Andrew Adjubi looked jaded after a number of early season races at University but hung on doggedly to hold 6th place in the B 400m in 52.69.

Myles Edwards is rounding into form having clocked a near pb 3:47.20 recently in the 1500m and today he doubled up in the 800m and 1500m. The 800m A race saw him badly placed at 700m but he produced a fantastic finish to come from 7th to 3rd in the home straight. Myles again showed his determination and finishing ability in claiming 2nd place in the 1500m B race in 3:53.57. As mentioned above Paskar Owar showed great tactical awareness and determination to finish 2nd in the 800m B race in a season’s best of 1:56.82 and repeated this feat in a similarly run race in the 1500m A race where he finished 2nd in a season’s best of 3:53.11. With his ability to compete over anything from 800m to 5000m he is proving his worth in his first season with the Valley.

As also mentioned above Antonio Silva was a class apart in the 5000m race, winning in 14:35.10. With Mo Aaden missing Mark Haskett stepped into the other 5000m spot but he is still in light training following an injury-wracked winter although he ran a typically determined race to clock a creditable 16:10.60 and finish 4th in the B race.

As mentioned above it was great to see Chris McAlister return to the team following a series of early season 400m hurdles races that saw him improving his lifetime best 4 times to 52.67. In winning today his time was also inside his best of 53.39 set last year. Casper Donnison fought really hard in the 400m hurdles B race and was rewarded with a new lifetime best of 59.53 in claiming 3rd place.

Panos Bekiardis was unable to repeat his win in Match 1 in the 110m hurdles A race but his 14.98 was a seasons’ best and he finished 2nd and only 0.11 seconds behind the winner. Panos is always enthusiastic and well prepared and he also ran a strong leg of the 4x100m relay. Casper Donnison was rewarded for his tenacity in the 110m hurdles B race as he clocked a new personal best time of 19.93 for 7th place and with a little specific training Casper can improve on this time dramatically in both hurdles events.

Robert Vallance started the 3000m steeplechase a little too fast and suffered for it in the closing laps but his time of 10:12.26 still earned him 4th place in the A race. With a more even-paced run he would surely have dipped under 10 minutes for the first time but it is good to see the 19 year old turning in such solid times in this very tough event. In the B race there was a return to the team for club stalwart Andy Hennessy who, with virtually no training, still managed to beat everyone bar the winner although his time of 10:42.00 was a “personal worst”. Bearing in mind that he has a best time of 8:39.71 dating back to 1999 it is clear that he is a class athlete who could run much quicker if he was able to train properly but his life as an orthopaedic surgeon does not allow him that luxury. Andy is a great supporter of the club and we hope to see him again this summer running for the club.

Nav Childs reached 6.46m in the Long Jump for 5th place in the A event but tweaked a muscle behind his knee in the process so was only able to jump for points in the Triple Jump but his 12.61m was still good enough for 3rd in the B event. As previously mentioned Stephen Edwards partnered Nav in both Long Jump and Triple Jump and, although also carrying an injury himself was 3rd in the B Long Jump with 6.09m before winning the A Triple Jump in 13.87m. We wish both Nav and Stephen a rapid recovery.

The Pole Vault was again a high scoring event for us as Greg Conlon repeated his win in Match 1 with the same height of 4.40m and continued to show the youngsters they need to up their game to beat him. It is a sign of the progress that Stanislav Vilga has made that although he jumped 3.60m he was disappointed with his performance, as despite finishing on the same height as 2nd place, he was equal 3rd in count back in the B event. Stan is a great clubman and also cleared a height in the High Jump with 1.40m for the points.

Michael Adekunle was also back in the team following his completion of university exams for the year. Still a bit rusty Michael jumped 1.80m for 7th in the High Jump but will now be able to concentrate on his jumping for the rest of the season and should rapidly close on his lifetime best of 1.92m.

With Steve Whyte, the club number one, missing, Dave Burrell returned to the team to partner his son Jamie Potton-Burrell in the Hammer and then join Ali Mortimore in the Discus. Jamie never really hit a big one in the Hammer but his 48.30m was good enough for 4th place in the A event with Dad Dave getting a safe throw in before suffering two foul throws and finishing with 38.80m for 5th in the B event.

Dawid Jerzykowski threw a season’s best of 49.31m to beat club number 1, Jon Harvey and finish 2nd in the A Javelin. Unfortunately Jon Harvey had suffered an Achilles injury that forced to limit his efforts and but he still reached a respectable 47.18m for 2nd in the B Javelin in what was a high scoring events for us.

The 4x100m team were running together for the first time with Kaylen Stuart on leg 1, Kerry Mathurin on 2, Mark Dyble on 3 and Panos Bekiardis on the anchor leg. The baton changes were all safe and the team did very well to finish 3rd in 43.03 and with more work together over the season will surely run quicker.

The 4x400m team saw Andrew Ajube run a great opening leg of 51.2, which was 1.5 seconds faster than he ran in the individual race – it is surprising what happens when people carry a baton! On the second leg Chris McAlister ran a storming race to close the gap on the leader and was rewarded with a 49.0 second split. Omar Hutchinson is gaining himself a reputation for super relays legs as his split was also 49.0 – again over 1.5 seconds faster than he ran in the individual race. This set the scene for Luke Lennon-Ford to chase down the leader, which he did with a stunning 46.5 second split. However, the gap was just too big and although Luke closed to within 0.4 seconds we had to settle for 2nd place but the time was an eye-opening 3:15.73, which is our fastest 4x400m in years. With 45.7 man Victor Dos Santos still to come in the club record could easily go this season.

Team Manager, Paul Oppe said “We didn’t get the win today that I though we might but we have established ourselves firmly in the promotion zone and with the next match in Derby I am quite excited. We always travel well and I am looking forward to winning there. Everything didn’t go our way but we still managed to finish a close 2nd and the team spirit today was exceptional.”