In the final British League match of the season at Wigan on Sunday the TVH men were looking to make it 4 wins out of 4 for this season, and they didn’t disappoint with another match win to finish the season on maximum points and champions of BAL Divison 1 and are promoted to the BAL Premiership next year.

The weather had a big part to play on the day, as the match started and finished in bright sunshine, but was interrupted towards the end by thunder and lightning and heavy rain, which resulted in the match being temporarily suspended and the mens 4x400m relay being cancelled. 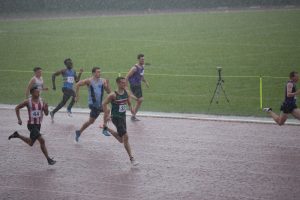 In between the thunderstorms there were some very good performances on the track and field, including a pb for Michael Cameron in the 3000m steeplechase and a pb for Ben Morgan in a rain affected triple jump.

A special mention must also go to Keano Paris-Samuel and Isaac Kitchen-Smith who suffered the worst conditions of the day when racing in torrential rain and getting soaked to the skin in the 200m, and then had to come back to race in the 4x100m relay at the end of the match.

The TVH Track Man of the Match award was won by Michael Cameron, for his first ever BAL win and pb in the 3000m steeplechase. 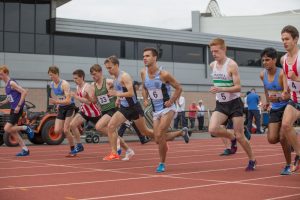 The TVH Field Man of the Match award was won by Jack Paget, for doubling-up in the hammer and discus and coming close to a pb in the hammer.

The TVH Club Man of the Match award went to joint winners Keano Paris-Samuel and Isaac Kitchen-Smith, for leading the line in a sprint treble of 100m, a very wet 200m and 4x100m relay.