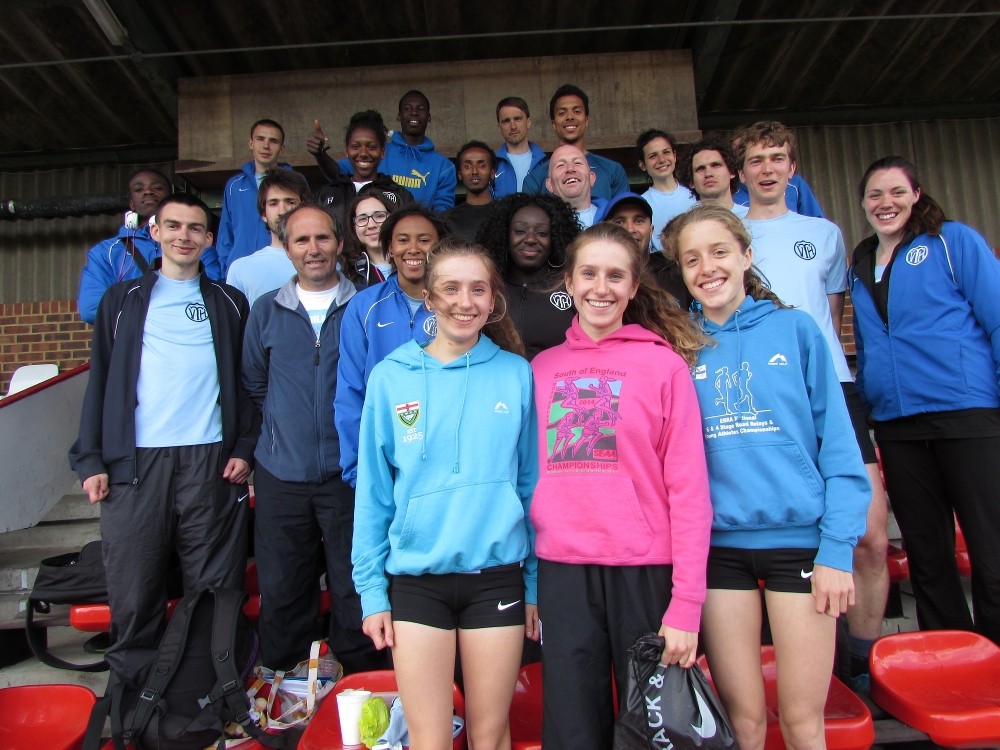 For the 2nd match of this season’s Southern League the Valley men and women made the relatively short trip to Walton-on-Thames on Saturday.

After a disappointing start to the season a larger 20 strong men’s team and 18 strong women’s team travelled to Walton keen to improve their league position and they didn’t disappoint.

In what turned out to be a very close match an all round better performance saw TVH finish in 2nd place on 177.5 points, 18 points behind match winners Walton on 197.5, with Southampton 3rd on 172 points and Basingstoke & Mid Hants 4th on 169 points.

This result means that TVH now move up 4 places from 15th to 11th place in SAL Division 1.

An 18 strong ladies team scored some very good points and did the team proud at the 2nd SAL match at Crawley.

There was one club record, seven event wins and many personal best performances.

Our U17 athletes did especially well, with Verity in her first ever 3000m race running a very well judged race to finish 2nd in a good time of 10m:28.9s (only 4 seconds away from the English schools qualifying time).

India, Kosana and Alice all had a superb 1500m steeplechase race and were all rewarded with times inside the English Schools qualifying standard in a race dominated by TVH coming home 1, 2, 3.

India for her fantastic steeplechase and new club record time of 5m:09.9s won the TVH Women’s Athlete of the Match.

Ashleigh especially impressed as she was close to all her PBs despite a lack of training since she has been at university.

It was also great seeing Jessica Tappin making her TVH debut, Jess had her second best ever javelin competition to come second with 37.09m.

The relays were another highlight for the ladies team with two wins.

The quartet of Sharni, Ugne, Rebekah and Jess ran a season’s best for TVH with a very good time of 49.9s to win the 4x100m.

U17 twins India and Kosana ran their first ever 400m race and Jess was back again for the 4x400m relay for the first time since her school days joining the twins and Lucy, all ran great legs to easily win in another fast time of 4m:03.3s, with Jess running an impressive 55.2s split.

It was a hard fought 2nd place for TVH built on the back of many good performances on the track and field, with 7 wins for the men’s team matched by 7 wins for the women’s team, along with several pb’s on the day.

Pb’s in the field went to Danny Burrowes with 11.21m in the triple jump and Artur Domingos 14.52m on his debut in the discus.

The Valley’s Man of the Match award for the best performance on the day by a Valley man went to Jason Comissiong for wins in the 110mH, 100m and 4x100m relay, plus a 2nd place in the 200m just minutes after winning the 110mH.

After a week of changeable weather it was a welcome surprise to enjoy a dry afternoon with plenty of warm sunshine to keep the team in good spirits.

First on the track was the 400m hurdles and a very close race saw Caspar Donnison take 4th place in the A race in 60.6s, with U20 athlete Robert Vallance producing a good time of 64.4s for 3rd place in the B race on his debut in this event.

A change in the line-up of the senior sprinters saw Joe Steele come into the team for his first 100m of the season alongside Jason Comissiong, and both men recorded a time of 11.2s to give Joe the win in the A race and Jason the win in the B race, with Jason’s time equalling his season’s best after arriving only a few minutes before the race and with hardly any warm-up, having been delayed in traffic on his way to Walton.

It was victory again for Jason in the 110m hurdles A race, where an incredibly close finish resulted in the same time of 15.8s being recorded for both 1st and 2nd place athletes, with the win being awarded to Jason, while a season’s best time of 20.5s secured 3rd place for Caspar Donnison in the B race.

With just 10 minutes to recover after the 110m hurdles Jason then stepped into the blocks for the 200m and a gutsy run brought him home in 2nd place in the A race in a time of 23.4s for his first outing over the distance this season, and U20 athlete Odell Okwuosa while nursing a sore ankle after a busy day on the field still managed to run the B race in a time of 26.2s for 4th place.

It was a Valley double debut in the 400m as the Southern League team welcomed senior athlete Andrew Ajube and U20 athlete Nilrem Stewart into their ranks, and both athletes proved their worth with Andrew coming home in 3rd in the A race in 52.1s, while Nilrem put on an impressive performance to win the B race in a time of 51.9s.

There was another Southern League debut for Thomas Joassin in the 800m, who proved a good addition to the team displaying good pace in a fast A race to record a new pb of 2m05.0s for 4th place, and it was another pb for Andrew Mitchell who came through to take 3rd place in the B race in a good time of 2m08.2s.

Scott Brewer then made it a hat-trick of pb’s in the 800m for the Valley as he competed in the non-scoring race and improved his pb by over 10 seconds to 2m19.1s for 10th place overall in the race.

For the 3000m Steve Norris found himself in a very fast race but maintained good form to come home in 3rd place in the A race in a time of 9m48.7s, while women’s team manager Manuel Da Silva took time out from management duties for his first track race of the season and had to dig deep after a fast start to produce a time of 10m00.2s for 3rd place in the B race.

The 1500m saw Steve Norris back in action and involved in a race within a race between team mates Christian Nielsen, Louis Marriott and Scott Brewer, with Steve taking 4th place in the A race in 4m39.9s, just over 3 seconds ahead of Christian who ran well to record a pb of 4m43.5s for 3rd place in the B race.

Both Louis and Scott were competing as non-scoring athletes in the 1500m and it was U20 athlete Louis who was first Valley man across the line, managing to finish ahead of Steve by less than a second in a time of 4m39.1s for 9th place overall in the race and was rewarded with a 10 second improvement on his pb, while Scott also ran a pb of 5m06.0s for 12th place overall in the race.

In the 3000m steeplechase Robert Vallance produced his best race of the season to improve his pb to 10m03.3s and was a clear winner of the A race with a winning margin of 25 seconds, and having only just finished the 1500m Louis Marriott bravely took on the challenge of the barriers and did well to come home in 3rd place in the B race in a time of 12m56.3s.

As the final events got underway the Valley’s 4x100m relay team took to the track, with decathlete Danny Burrowes joining sprinters Jason Comissiong, Nilrem Stewart and Joe Steele it proved to be a winning quartet, and as Joe Steele took the baton on the final leg he pulled clear of the rest of the field to cross the line for the win in 43.9s.

The final event on the track saw a very strong field for the 4x400m relay, and 400m runners Andrew Ajube and Nilrem Stewart, along with 400m hurdler Caspar Donnison and 800m runner Thomas Joassin gave their all in a very close race to come home in 3rd place in a good time of 3m32.0s.

On the field it was good to welcome back Steve Whyte onto the team, his presence in the heavy throws having been sorely missed in the early part of the season due to various injuries and he was still suffering with a knee injury as he took to the field alongside Ali Mortimore for the first event of the day, the shot putt.

It proved to be the same result in the hammer, as the combination of Steve and Ali took good points again with 2nd place in the A string and B string with throws of 49.74m for Steve and 35.45m for Ali.

Having not found good form and hampered by injury Steve was forced to pull out of the discus, so Ali took on the A string to finish 4th with a throw of 31.21m and U20 athlete Artur Domingos stepped in to make his debut in both the Southern League and the discus and did well to earn a point for the team for 4th place in the B string with a throw of 14.52m.

In the javelin U20 athlete Dawid Jerzykowski is starting to find good form and a throw of 47.10m brought him 2nd place in the A string and Ali Mortimore ensured a good points tally by producing a throw of 37.00m for a very good win in the B string.

It was a Valley junior double for the jumps as U20 athletes Odell Okwuosa and Danny Burrowes joined forces for the high jump, long jump and triple jump, with decathlete Danny Burrowes making a good start on his Southern League debut.

Both athletes were very evenly matched in all the jumps, though Odell was struggling to find top form as he was suffering with a sore ankle and he did well to compete in all 3 jumps plus the 200m on the day.

In the high jump Danny jumped well with 1.65m for 4th place in the A string and Odell matched his season’s best jump of 1.60m for 3rd place in the B string.

It was very close again in the long jump as Odell’s jump of 5.48m took 3rd place in the A string and Danny’s jump 5.45m was good enough for 2nd place in the B string.

It was an unusual situation in the pole vault, as Stan Vilga found himself up against his British League team mate Greg Conlon who was competing for Walton on the day, and although Greg took the honours with a jump of 4.15m, Stan was not too far behind with a jump of 3.60m for 2nd place in the A string.

Keen to compete in another of his decathlon events Danny Burrowes jumped well in the B string pole vault to equal his season’s best of 2.40m for 3rd place.

As the match drew to a close the final scores revealed that TVH had finished 2nd on the day, a very pleasing performance given how close the match scores were and earned a valuable 3 match points which help move TVH up to 11th place in the league.

This result has now given the team some positive momentum to take into the next Southern League match at Crawley on Saturday June 20th – we shall be looking for another good result so make sure you come and support the team!