TVH ladies have officially been ranked as the best athletics team in the UK. Other highlights include promotion of the men’s British Athletics League team, medals at championships and lots of new club records.

The 2015 Track and Field season has been exceptional in both league competitions and individual championships. Although our top athletes and teams may get most of the headlines that makes us the best overall club in London and one of the best in the country, it’s all our members, supporters, officials, coaches and volunteers that makes TVH such a great club.

As far as the league’s goes, pride of place goes to the UK Women’s Athletic League team which, in only their second year in the top flight of UK athletics, dominated the Premier Division by winning all their matches to be crowned the Champions and will go on to represent GB in the European Club Champions Cup next May. Enormous thanks go to Manuel da Silva for his incredible work as team manager.

Many of TVH’s UKWAL and BAL athletes combined with some of TVH’s up and coming athletes in the combined men and women Southern Athletics League Division 1. Having achieved promotion last year and after a slow start in the first match in April, the team pulled out some fine performances to finish a strong 8th place out of the top 16 teams.

TVH also successfully entered a Master’s Track and Field league for the first time in 2015, finishing a commendable 5th place in the Southern Counties Veterans Mid-London Division. TVH will be looking at growing this team for the 2016 season.

The junior teams compete in the UK Youth Development League (UKYDL). In the older age group, catering for under-20 and under-17 athletes, the team is in the Southern South/West Division 1 had some outstanding performances throughout the season to place in their highest ever position, 3rd. The equivalent team, catering for the under-15 and under-13 age groups (South/West Division 1B), also have some of UK’s most exceptional athletes that kept breaking some of TVH’s club records throughout the season with fantastic individual performances. The team finished in a credible 7th position – with many athletes showing great potential.

TVH also provides competitions for under-11 athletes as part of Kids on Track team that meet on Saturday morning. This group is flourishing with record numbers and are currently the most oversubscribed age group. TVH will be looking at offer more sessions for this age group to allow for more promising young athletes to join over the next year.

Teams are made up of great individual athletes and our team members also have excelled in championship events. TVH athletes have been crowned schools, university, county, regional and national champions. Many club records were exchanged during the season and there were a record 40 New Club Records in 2015 (does not include records that were beaten more than once over the season). There are too many athletes to single out but our UKWAL team captain Zoey Clark has been had an exceptional year for the club, Zoey not only helped the team win the UKWAL title, is a British University Indoor Champion, holds 3 Scottish titles, is the holder of 6 club records and also won a gold medal for GB at the European U23 championships as a member of a record breaking 4x400m quartet. 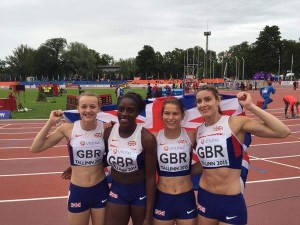 Individual honours at championships are listed below:

Congratulations to everyone, 2015 has been TVH’s best ever overall Track and Field season. With this fantastic team spirit, commitment and support of every Thames Valley Harrier the 2016 season will also be a joy to be part.