If you are looking for a tough cross country course then you wouldn’t have to look much further than Stanmer Park in Brighton,which was host to this year’s South of England Cross Country Championships on Saturday.

The whole race consists of laps up, down and around a large hill in Stanmer Park, but the word “hill” doesn’t really do it justice and this being the Southern XC Champs the race distance for the senior men was extended to a lung bursting 15k.

However this didn’t put off the Valley men who travelled to Brighton with a good sized team of 14 senior men and 3 junior men ready to take on the hill.

First home for the senior men was Mohamud Aadan who had an excellent race to finish in 6th place out of a total of 857 finishers, with the Valley men’s 6 to score team in 19th place out of 55 finishing teams.

In the U20 men’s 8k race Toby Clyde also had a strong run to make the top 20 in 19th place out of a finishing total of 108, but with 4 to score and only a 3 man team the Valley junior men were unfortunately just one short of finishing a complete team on the day.

As the usual Southern XC course at Parliament Hill is host to the National XC Champs on February 21 this year, it meant a change of venue to Stanmer Park in Brighton, which last hosted the Southern XC Champs 3 years ago in January 2012.

Some would argue that this was a change for the better, but with the senior men facing a gruelling 15k race consisting of 3 large laps over the hill, preceded by a small warm-up lap around the base of the hill, it is debatable as to which is the harder course.

The hill at Stanmer Park is definitely not for the faint hearted, with each lap turning into the woods at the far side of the hill for the first steep long hill climb, not made easy by tree roots and tree stumps sticking up through the ground.

This first hill climb is then followed by numerous ups and downs as the course twists it’s way around the hill and through the woods, briefly emerging onto flat open ground at the base of the hill before turning back into the woods for another long steep ascent up the near side of the hill.

After such relentless hill climbing there was some relief provided by a long fast downhill descent to the bottom of the hill and the finish of the lap, but then there were a further 2 laps to complete which was a real test of strength and stamina!

Thankfully the weather was kind on the day of the race, with some mild winter sun and moderate winds providing cool and good race conditions, while overnight rain had only brought significant amounts of mud onto the downhill descent to the finish.

As the senior men’s race got under way it was clear that no one was willing to take on the early pace and it was up to the Valley’s Chris Smith to lead them into the woods and up the first hill.

By the 2nd lap the race was in full swing and it was another Valley man, Mohamud Aadan, at the front in a group of around 5 athletes fighting it out for the lead.

For the start of the 3rd and final lap this leading group was down to just 3, including Mo who was in with a chance of a medal, but a combination of going with a fast paced 2nd lap and some spike pins which had been bent around on the tree roots meant it was a painful final lap for Mo.

This saw him finish the race in 6th place in a time of 50m 50s, just 29s behind the winner in an excellent performance and his best ever finish in the Southern XC Champs, with promising signs that there is still more to come this season.

In another fine performance over the country Chris Smith once again made it into the Southern top 20 in 20th place and was 2nd Valley man home in a time of 52m 54s, though as a strong hill runner was hoping to finish higher had it not been for an injury interrupting his training in the New Year.

Matthieu Ribault ran a well judged race to be 3rd Valley scorer on the day, as he used his marathon strength to good advantage to finish in 181st place and just under an hour in 59m 15s.

Next home for the Valley was Andrew Mitchell, another marathon man who is gaining good experience race by race and his time of 1h 01m 49s brought him home in 275th place.

Peter Scannell having recently moved to the Brighton area could claim Stanmer Park to be his home course and his time of 1h 02m 48s certainly got him home in good time for tea, as he finished in 303rd place and 5th scorer for the Valley men.

Another good race from Steve Norris gave him the honour of the 6th and final scorer for the team, with his time of 1h 04m 16s putting him in 358th place to finish the team in 19th place out of 55 finishing teams.

It was just a matter of 8 seconds and 7 places which split the next 2 Valley finishers, with Christian Nielsen finishing in 447th in 1h 06 55s, just ahead of the fast improving Greg Bennett in 454th in 1h 07m 03s.

It was a return to his Brighton roots for Matt Ponting as he raced around Stanmer Park and the familiar surroundings encouraged him to finish in 485th place in a time of 1h 08m 04s.

A solid race from Richard Bell saw him complete the course in a time of 1h 12m 35s for 618th place in the race, but unfortunately it wasn’t such a good day at the races for Richard Hooley, whose spikes badly rubbed his feet forcing him to stop once due to the pain, but thankfully he made the finish in 1h 15m 24s for 675th place.

Having already raced well against each other this season, Jason Sewards and Paul Woodgate had one of their closest ever finishes as they completed the Valley men’s runners for the day.

Paul had the upper hand for nearly all of the race, establishing a good lead of almost half a minute over Jason, but somehow Jason fought back on the final lap and managed to overtake Paul just before the finish line to take 753rd place in 1h 20m 09s, just 2 seconds ahead of Paul in 1h 20m 11s and 754th place, out of a total of 857 finishers in the race.

To be separated by just 2 seconds at the end of a 15k race is some finish!

In such a tough race it was inevitable that there would be a number of casualties on the day and unfortunately the hill did claim one Valley men’s vest, as Manuel Da Silva was forced to pull out of the race due to severe breathing problems, though thankfully he recovered well enough for the trip home.

Earlier in the day it had been the turn of the Valley’s junior men in the U20 men’s race over 1 small and 2 larger sized laps for their race distance of 8k.

Undaunted by the hill Toby Clyde had a strong race and soon found himself up in the top 20, a position which he managed to hold on to while being closely pursued down the final hill towards the finish, to give him a well earned 19th place and a time of 28m 07s, a great finish in his first U20 Southern championships.

Robert Vallance is another U20 athlete making great strides this season and he once again showed good form and determination to be the 2nd junior Valley man home in 68th place in a time of 31m 18s.

Not far behind Robert and the final member of the U20 Valley trio on the day was Bashir Mohamed, who despite having only started training again since December raced well to finish in 32m 16s for 82nd place out of a total of 108 finishing athletes.

It was great to see such a good turnout for the Valley on the day and many thanks to all the travelling athletes and supporters who made the trip to Brighton. 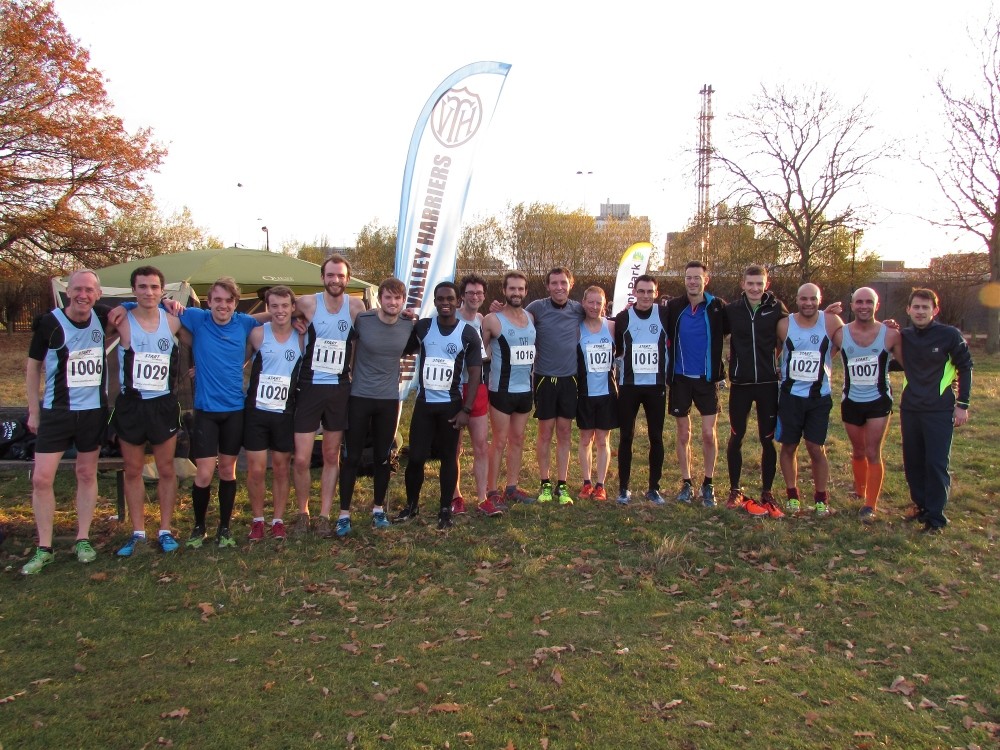 The Scrubs put on its best for the 3rd Met League race on Saturday 3rd December. With clear sky, the bright sunshine […] 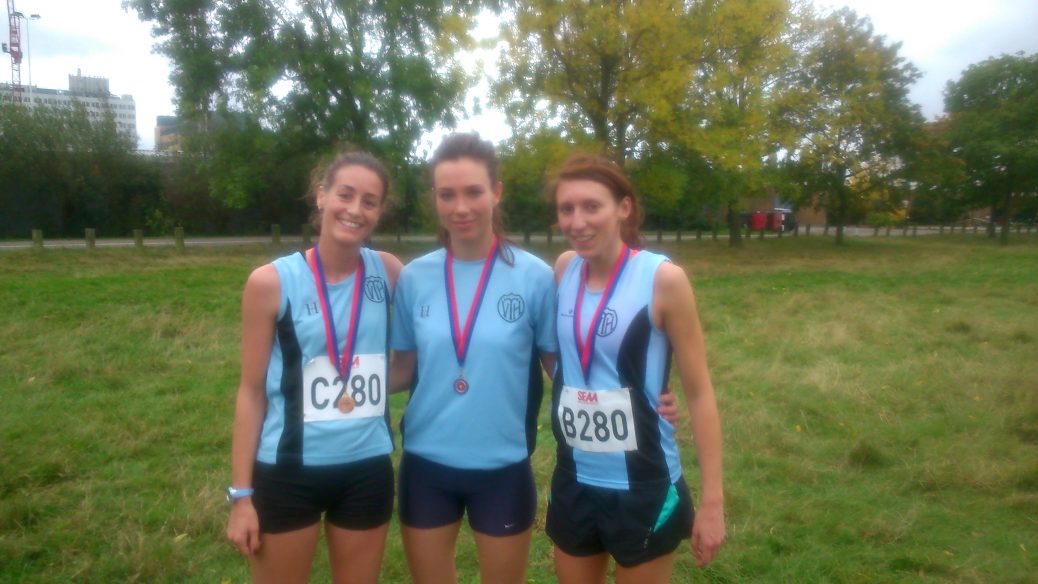 This Saturday was the South of England Cross-Country relay championships at our home ground on the scrubs. Three complete teams of 3 […]